Media Release: Take a stroll under the devastating Algerian sun in the company of Albert Camus 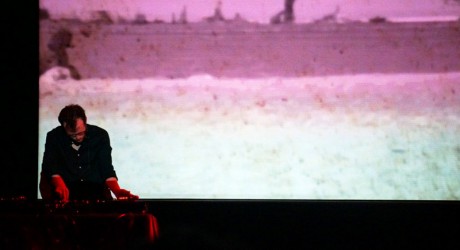 ON Thursday 20 and Friday 21 March 2014, the Institut français d’Ecosse invites HELICE Production for a literary DJ night like no other to celebrate the Fete de la Francophonie.

Albert Camus lit L’Etranger / REMIX is an interdisciplinary visual and oral experience based on L’Etranger (The Stranger), Albert Camus’ first and most beloved novel – read by the author himself and mixed live with contemporary electronic music by Belgian DJ Pierre de Mûelenaere.

Original images mixed live by the two VJs of Orchid Bite are simultaneously superimposed over the recitation.

In this whirlwind orchestrated by Camus’ voice, the spectator can really feel the sense of solitude and absurdity felt by Meursault, L’Etranger’s protagonist.

Pierre de Mûelenaere explains: “By combining text, music, and visual sequences that wind and loop together, the spectator is drawn into a personal experience of Camus’ masterpiece.

“The combination of audio and visual impulses practically forces you to just let go, to accept that you don’t understand everything.

“Maybe you close your eyes, plug your ears, maybe you start daydreaming in order to get into the very essence of ‘Camusien’ vertigo – which isn’t just a philosophical vertigo, but also most importantly a sensual vertigo.’’

Pierre de Mûelenaere studied literature and is heavily involved in Brussels’ electronic scene, so after a chance discovery of an old vinyl recording from 1954 of Camus reading L’Etranger, he knew he had the chance to create something special by knitting together his passions for literature and for music into a single performance.

Originally created in 2008 with appearances in Belgium, France, the Netherlands, Luxembourg, Turkey, Canada, and Morocco, HELICE productions has launched a new tour in celebration of the 100th year of the birth of Camus in 2013.

Since 2008, HELICE Productions has been dedicated to producing multidisciplinary performances and shows.

They are particularly intent on creating a space for literature to overlap with and inspire other disciplines, and especially those within electronic culture.

This performance of Albert Camus lit l’Etranger /REMIX is supported by Wallonia Brussels International and programmed as part of the Semaine de la langue française et de la francophonie from 15 to 23 March 2014, a week of events celebrating French language all around the world.

Every year around 20 March, the International Week of French Language and Francophonie is an unique opportunity to celebrate the richness and diversity of the French language, and to discover all that it has to offer.

It is coordinated by the International Organisation for La Francophonie, whose mission is to embody the active solidarity between its 75 member states and governments, which together represent over one-third of the United Nations’ member states and account for a population of over 890 million people, including 220 million French speakers. www.francophonie.org

The Institut français is the agency of the French Ministry of Foreign and European Affairs with responsibility for cultural activity outside France. In Scotland, the agency is represented by the Institut français d’Ecosse (Edinburgh) which promotes French language and culture by providing French courses and organising events (film screenings, talks, exhibitions, concerts, etc.).

It also aims to encourage cross-cultural exchange between France and Scotland, in cooperation with Scottish Francophile institutions. Additional information is available on www.ifecosse.org.uk or follow us on Twitter @ifecosse.