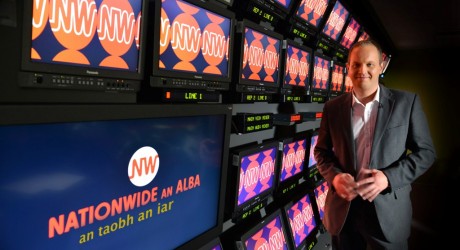 Nationwide an Alba: An Taobh An Iar / West

FASCINATING stories of years gone by will be rebroadcast in a new BBC ALBA series using footage from the popular series, Nationwide, which was the BBC’s long-running news and current affairs show transmitted on BBC One from 1969 to 1983.

Nationwide was a magazine show with a remit to cover regional stories throughout the whole of the United Kingdom and BBC ALBA is offering viewers the opportunity to see some of the best of Nationwide’s Scottish content over a three-week period with a selection of stories from the West, East and the islands of Scotland.

Programme one of the three-part series, Nationwide an Alba: An Taobh An Iar / West, will take a look at the most compelling stories of that time from the West of Scotland, many of which have only been seen once before, presented by BBC News journalist, Alasdair Fraser.

Highlights include droving cattle 200 miles from Skye to Crieff, an insight into the work of Glasgow’s Air Ambulance Service in 1974 and why Ballachulish was regarded by some as the dirtiest village in Scotland in 1973.

Produced by BBC Gàidhlig, Nationwide an Alba will commence on Friday 7 March from 9.00 until 10.00pm with an hour long programme being transmitted on each consecutive Friday over the three week period.