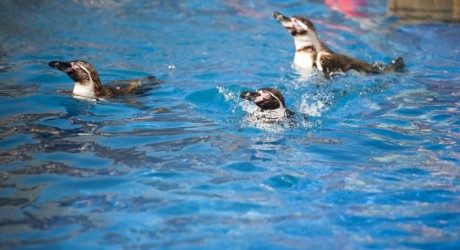 A NEW waddle of Humboldt penguins, three of them male, recently arrived at St Andrews Aquarium in Fife and are now settling into their new enclosure alongside resident penguins, Andy, Shirley, Judy and Kim.

The three males and one female have been transferred to Scotland from a marine park in Blankenberge, Belgium, and are now permanent residents at the coastal attraction in Fife bringing the complement of Humboldt penguins at the attraction up to eight.

Named following Andy Murray’s triumphant win at Wimbledon in 2013, the new additions to the Murray clan will be named Jamie, William and Roy after Andy’s brother, father and grandfather.

The newest female penguin has also been named Virginia, after Virginia Wade who was the last British female to win Wimbledon in 1977.

John Mace, manager at St Andrews Aquarium, commented: “We are so excited to be welcoming four new penguins into the waddle.

“They have settled in well overnight and seem to be enjoying exploring their new home. While they are quite young male penguins, we are hoping that in time they choose a mate and that we may be lucky enough to hear the p.p.p.pitter patter tiny feet in the future.”

Since arriving last year, the waddle of Humboldt penguins have been extremely popular with visitors, with Judy Murray even popping into the aquarium to visit her name-sake late last year.

Humboldt penguins originate from South America and numbers have been in steady decline over the past decade due to over fishing, habitat destruction and climate change.