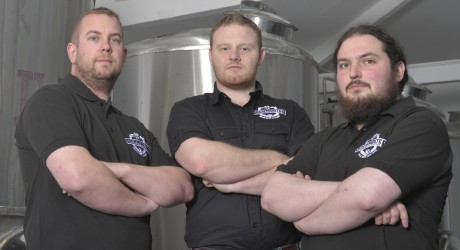 A SCOTTISH brewery has recently expanded in to new premises triple the size of its previous facility, to meet demand as it continues to brew up further growth.

Brewmeister, a craft beer specialist, which was launched in 2012, has recently opened a new brewery facility in Keith, in Moray, following significant investment and the continued success of the business.

The 5,000 sq ft facility – located at the Isla Bank Mills, in the heart of the town – will allow Brewmeister to increase its brewing capacity by over four times, and meet growing demand from customers in the North-east and across the world.

The brewery also has future plans to build a retail unit for selling its specialised beers, as well as opening the facility to host behind the scenes tours.

Brewmeister, which was launched by student at the time, Lewis Shand, now has 13 members of staff, and expects to develop a number of employment opportunities for the surrounding areas and the North-east.

The brewery has also recently undergone a rebrand to coincide with the expansion, and its new labels are already up for a Scottish design award.

Managing director of Brewmeister, Lewis Shand, said: “We first launched Brewmeister in a small farm steading in 2012, and in the past two years we have seen a huge increase in demand for our beers, and we quickly outgrew the facilities.

“Expanding to larger premises allows us to significantly increase our production and will enable us to grow as a business through increased ability to export further and also employ more staff.

“The new brewery is also key to our future plans of creating a retail outlet to sell our beers direct to the customers, and also educate them through tours at the site.”

The firm, which was first launched on a £5,000 student loan, currently has six types of craft beers, including the world’s strongest beer, Snake Venom (67.5 per cent), with several new recipes in the research stages.

Lewis has also recently been announced as a finalist at this year’s Grampian Food Forum Innovation Awards in the Food and Drink Entrepreneur category.

Brewmeister is currently available in several Aberdeen bars, hotels and restaurants, including the Carmelite hotel, The Gas Lamp and the Queen Vic. The firm is already exporting to Europe, Asia and is in talks with US distributors.