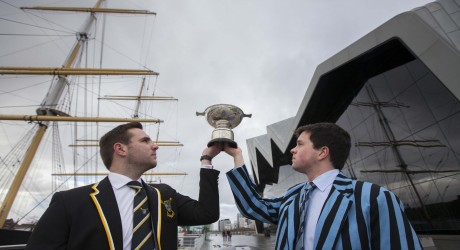 MEMBERS of Edinburgh and Glasgow’s university boat clubs came face to face at the Riverside Museum to announce the date of this year’s Scottish Boat Race which will take place on Saturday 24 May in the Harbour area of the River Clyde.

Having been running since 1877, the event is recognised as the third-oldest boat race in the world, behind only the famous Oxbridge contest and Harvard-Yale Regatta in America.

Previously starting in the Dalmarnock area of Glasgow, organisers moved last year’s event further into the city centre, with the new 2.6km race route running from Broomielaw Quay to a grandstand finish at the Riverside Museum.

Despite being nearly 140 years old, rivalry around the race has not subsided and each year sees two of the country’s leading sporting university’s vying to take home the prize.

However, Edinburgh stormed to victory in last year’s race and will be hoping to build a similar run.

Meanwhile, Edinburgh’s Women’s squad will be looking to extend their own run of wins while their Glasgow counterparts will be desperate to break their duck and claim the title.

There will be seven races in total, incorporating men’s and women’s events, with each team consisting of eight rowers and a cox.

Throughout the day there will also be a Rowing Awareness Festival at the Riverside Museum, providing opportunities for members of the public to learn more about the sport, as well as other water-based demonstrations from partner organisations.

The overall event will run from 10am until 2pm and is free to attend.

Speaking of this year’s race, Ronan Murphy, president of Edinburgh University Boat Club, said: “This is a fantastic time of the year for the club with a full schedule of competitions. However, the Scottish Boat Race has a particular allure to it and last year’s victory made our guys hungrier for more success.

“The new route had a really positive affect for last year’s event and provided some excellent viewing spots for members of the public to come along and support the competitors. I’m just hoping they’ll see another Edinburgh double this year.”

Stephen Fisher, club captain of Glasgow University Boat Club, is equally buoyant about the event: “The Scottish Boat Race is definitely one of my favourite events of the year and brings an intensity that is hard to match in any other competition.

“Last year was hard to take as we had enjoyed a long run of success, but I know both our men’s and women’s squads have been working exceptionally hard for this year’s race and we’re hoping to keep both titles in Glasgow this time around.

“The day itself continues to get bigger and better and we would encourage members of the public to come along and see some high class racing and help raise the profile of a fantastic event.”

Please note this may be subject to change, depending on tide levels and weather conditions.