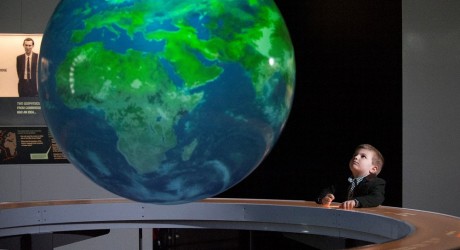 THIS Easter, magic meets the latest in science interpretation with the opening of Scotland’s Timelords, Our Dynamic Earth’s biggest ever redevelopment.

Celebrating the life of one of Scotland’s greatest scientists, James Hutton – widely regarded as the father of modern geology – three new interlinked galleries will take visitors from a Georgian-style classroom complete with magic blackboards and talking portraits, right back through Deep Time to the Big Bang and beyond.

The visitor journey begins as oak panelled doors open on a classroom where the ghost of James Hutton demonstrates his theories on how the earth was formed, moves on to a gallery with a giant illuminated globe showing the effect of plate tectonics, and continues with the brand new Deep Time Machine.

The experience includes brand new footage created in collaboration with our Dynamic Earth and the National Space Centre Creative which offers visitors a chance to witness the development of the universe from the Big Bang through to early Earth.

Each gallery is completely different and ranges from interactive exhibits to the impression of travelling through time.

Edinburgh born and bred, James Hutton was the first to challenge commonly held theories about the Earth’s evolution, by studying the rocks and land formations around Edinburgh and East Lothian.

He discovered the concept of Deep Time, as well as recognising that Earth is a ‘heat engine’, capable of melting rock.

Professor Stuart Monro, scientific director of Dynamic Earth, enthuses about the new galleries and says: “It has long been a personal ambition of mine to see James Hutton celebrated.

“So much of his discoveries and thinking are relevant today and many great thinkers have been influenced by his ideas including Charles Darwin and the more modern scientists who gave us the concept of plate tectonics.

“We hope the new galleries will teach people about Edinburgh’s major contribution to discovering how the Earth works, while also demonstrating – and commemorating – the importance of Scotland’s intellectual heritage.”

Commenting on the new developments, Eilidh Massie, Dynamic Earth’s marketing manager, said: “Without Hutton’s discoveries, Our Dynamic Earth would never have been built, so it is only right that we honour him – especially as he wrote his ‘Theory of the Earth’ within a stone’s throw of where we are.

“The innovative technology is sure to grab the attention of old and young alike. The time machine, which is also part of the redevelopment, has always been a particular highlight for visitors, and we think people are going to love the new, more dramatic effects as they travel through billions of years into deep time.

“This is the biggest redevelopment we’ve ever had at Dynamic Earth, and we’re all incredibly excited about it. We can’t wait to share the new experience with our visitors.”

The £1 milli­­­­­­­­on gallery, part funded by the Heritage Lottery Fund, was designed and created by award-winning Edinburgh company, Studio MB.

For more information on the new galleries, as well as all the events and activities happening at Our Dynamic Earth over Easter, visit www.dynamicearth.co.uk.