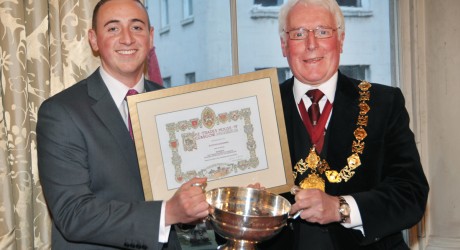 STEPHEN Deigman, a fourth-year engineering technician apprentice with BAE Systems Naval Ships, has won the Trades House of Glasgow Modern Apprentice of the Year Award (MAYA) 2014, which celebrates a learning path established by its Crafts back in medieval Scotland.

Stephen, who lives in Alexandria, West Dunbartonshire, is currently working on the Type 26 Global Combat Ship project and training to become a Piping Detail Designer.

“It was the Craft Guilds that united to form the Trades House in 1605, which established the apprenticeship system in Glasgow back in medieval times,” said Hamish Brodie, Deacon Convener of the Trades of Glasgow.

“We set up MAYA in 2006 to reinvigorate our efforts to promote the vocational and personal benefits that apprenticeships provide in training and development, showcasing the commitment and capability of candidates who have chosen this route to further their career prospects, while promoting traditional trades alongside more modern skills.

“Our warm congratulations go to Stephen. While our six finalists are all a real testament to the exceptional apprenticeship schemes operated by each of their employers, our judges found that Stephen was an outstanding candidate and a strong advocate for the apprenticeship model. He has proved a worthy winner of our title this year.”

This involved designing and manufacturing a seating device to allow wounded, injured or sick ex-service personnel to participate in sailing activities, for which he won a STAR award in recognition of his outstanding effort and achievement.

The winner and runners up of the annual MAYA initiative, sponsored this year by BAE Systems Naval Ships, was announced at an awards ceremony in the Trades Hall, home to the Trades House of Glasgow.

Charlie Blakemore, Business and Transformation director at BAE Systems Naval Ships, who presented the awards, said: “I am delighted for our apprentices who were recognised in the Trades House Modern Apprentice of the Year Awards this year, particularly for Stephen who took the top spot.

“It was great to see apprentices from a broad spectrum of industries being recognised and inspiring to see a new generation of skilled apprentices being awarded at the start of their careers.

“Their success is not only testament to the commitment and enthusiasm they have demonstrated throughout their apprenticeship training but also the sense of pride they bring to their work.

“As an integral part of our business, we are very proud of our apprentices and wish them all the best for a long and rewarding career.”

Certificates of Commendation were awarded to three other finalists, Tammy Rice, a food and beverage assistant with Hilton Glasgow, and also from BAE Systems, fabricator/plater apprentices, Andrew Mimnagh and Paul McKeown.

As the winner of MAYA 2014, Stephen was presented with an inscribed trophy, which will remain on display in the Trades Hall. He also received an inscribed replica of the trophy, a cash prize of £400 and a certificate.

A second prize of £250 and a third of £150 was also awarded, along with certificates of commendation for all finalists.

MAYA 2014 was open to people employed in the Greater Glasgow area who are either working towards a Scottish MA, or were certificated no earlier than May 2013.

Candidates were assessed against the criteria of capability, contribution, commitment, overcoming difficulties, marketing and transferability, as well as the overall quality of the application.