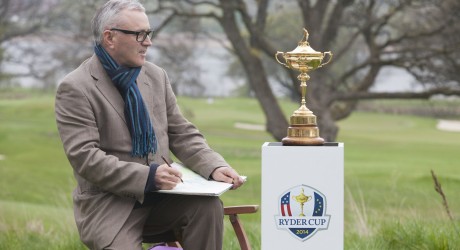 IN support of its Official Charities, Ryder Cup Europe is inviting budding artists and designers from across Scotland to participate in a national art competition to design the official poster of The 2014 Ryder Cup.

The poster competition was launched at Mar Hall in Renfrewshire, where an exciting palette of individuals from the charities, the golfing world and the arts firmament met to show their support for this unique initiative.

The overarching aim of the poster competition is to raise awareness of, and support for, the Official Charities of The 2014 Ryder Cup: Quarriers, Friends of St Margaret’s Hospital, Perth & Kinross Disability Sport and The McGinley Foundation.

Speaking at the launch of the poster competition at Mar Hall today, Trish Godman, chair of the Quarriers’ Board of Trustees, said: “The opportunity to design the official poster of The 2014 Ryder Cup competition is a fantastic way to encourage direct engagement with the charities involved and to raise public awareness of the work they do on a day to day basis.

“We are optimistic that this nationwide competition will prove to be a highly successful initiative for all four charities; increasing public profiles, generating longstanding support and providing a highly-effective fundraising mechanism through the sale of the winning design.”

The creative ambit of the competition is vast, with any artistic techniques and methods being accepted by the judging panel. All that is required is that submissions encapsulate elements of Scotland, golf and The Ryder Cup.

Frank Boyle, artist and former Cartoonist of the Year, was present at the launch of the competition and created his own special artwork which will also be auctioned on behalf of the charities.

He added: “The poster competition provides a fantastic opportunity for artists and designers of all disciplines to showcase their talents. It’s not necessary to be famous or professional, just to have a clear vision and add creativity to the concepts. This competition could provide a platform for a new artistic star.

“Having learned a bit about the extensive work of each of the four charities involved, it is clear that this competition is not only supporting budding artists and designers, but also making a valuable contribution to supporting extremely worthwhile causes.”

As well as taking away with them the title of Designer of the official 2014 Ryder Cup poster, the successful artist will also win a fantastic trip for two to Paris, £200 worth of art supply vouchers and a framed copy of their winning design, signed by European team captain, Paul McGinley.

The winner will also be invited to see their design on sale at Gleneagles during the match and to attend the fantastic opening ceremony of The 2014 Ryder Cup.

Edward Kitson, match director for the 2014 Ryder Cup, said: “Ryder Cup Europe is extremely pleased to be able to launch, in collaboration with the Official Charities, the competition to create the Official Poster of The 2014 Ryder Cup. We hope the competition will inspire budding or established artists or designers across Scotland who may or may not play golf, to take part and submit their entries for consideration by our judging panel.

“It is great to see each of the Official Charities coming together on this collaborative project, which as a result will see benefits spread across a local, regional and national scale. Ryder Cup Europe has a long history of supporting charity during both home and away matches and 2014 is no exception.”

Paul McGinley, European team captain, commented: “I am very excited to be part of the competition’s judging panel.

“I look forward to seeing the entries which I’m sure will encapsulate the spirit of The Ryder Cup itself. It’s fantastic to think that the winning entry from a member of the public will create a piece of Ryder Cup memorabilia that will not only be remembered for years to come but will also raising significant funds for the Official Charities of The 2014 Ryder Cup.”

The competition will run from Friday 25 April until Friday 27 June 2014. Completed designs are to be submitted by email to officialposter@quarriers.org.uk and should be accompanied by the entrants name, age, address, email address and contact number.

Following the competition closing on 27 June, a shortlist will be compiled and an exclusive judging panel comprised of representatives from the worlds of art, golf and nominated charities, including European Team Captain, Paul McGinley, will decide on the winner and two runners up.

For full details regarding the official poster competition, click here.