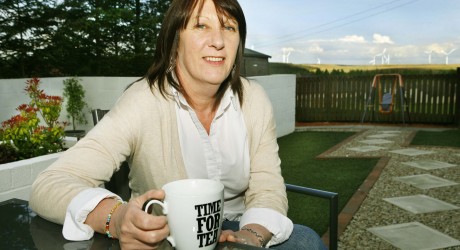 A WOMAN who loves wind turbines so much has revealed how she moved home to be closer to the green energy machines.

Now, Elaine McGonnal has thrown her support behind plans for another small wind farm near her home in South Lanarkshire.

The mum of three, who works as a kitchen assistant, has backed Banks Renewables plans for the Crofthill Community Wind Farm, because she finds the gracefully turning turbines “soothing”.

Her letter of support is among more than 100 from members of the community around the proposed five turbine Crofthill site, near her home in Forth, which could generate up to 17MW of clean, green energy and provide a list of financial benefits to the local economy.

Elaine, 55, told how she moved to her home five years ago specifically to enjoy views over one of the largest wind farms in the UK and says she loves nothing more than sitting in her back garden with a cup of tea, watching turbines turning.

She said: “When I came with my husband Francis to view the house I quite liked the front, but when I saw the back was absolutely sold on it.

“I know there are some people that say they are noisy but we’ve not heard anything and if they are good for the environment I can’t see why people wouldn’t support more wind farms being built.”

The 54 turbine Blacklaw wind farm behind Elaine’s garden is run by Scottish Power and has been in operation since 2005.

Plans for the five turbine wind farm proposed by Banks Renewables were submitted to South Lanarkshire Council in September 2013 following two rounds of public exhibitions detailing the project and the community partnership proposal, which would provide significant benefits for the local community.

Another local resident hoping the project is approved, is Jim Hewlett, 61, a retired Radiographer from Tarbrax

“If we want to avoid global warming then we have to do something about it. Part of that is to build wind farms.

“Obviously, some people won’t like the appearance, but I find them quite interesting. I can see a local wind farm from the windows of my house, I enjoy the view and find them quite relaxing.”

The Banks Renewables community partnership proposal would see the local community receive a two per cent share of the annual gross revenue from the wind farm – money that could be used by local groups, organisations and initiatives close to the heart of the community.

Based on current estimates, this would result in overall community funding of £130,000 per year and around £3.2 million over the life of the wind farm.

Following discussions with local businesses, council and stakeholders, £43,500 per year of this community funding for the first five years operations would be spent on a targeted training and employment initiative, which could create new opportunities for around 100 people, helping them to find long term employment.

Colin Anderson, development director at Banks Renewables, said: “It’s great to hear from so many local people backing our proposals for different reasons.

“We set out to create a wind farm that has the widest positive impact in terms of the community, environment and local economy and we believe, if approved, the Crofthill proposal will achieve this.”

Despite supporting the Crofthill proposals, disappointed Elaine says she won’t get the chance to enjoy the new turbines if they are approved, because she is planning to return to her hometown of Fauldhouse, West Lothian, for family reasons.

She added: “I will miss the turbines and the peace and quiet round here, but we’ll be next to my family so it will be worth it.”

Banks Renewables is part of the Banks Group (www.banksgroup.co.uk), a family firm founded in 1976, which now employs 420 people in the renewable energy, property and mining sectors. The company’s development with care approach underpins all its work, driving community consultation and environmental excellence.