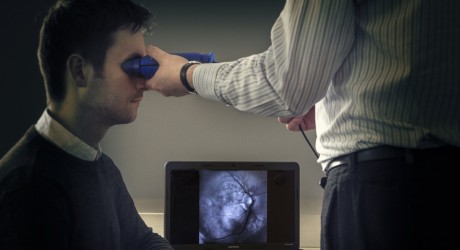 A PORTABLE eye-scanning camera that could prevent blindness in millions of diabetes sufferers is being developed in Scotland, thanks to backing from angel investors.

Now Dr Craig Robertson, 45, the managing director and founder of Epipole, has signed a £400,000 investment deal which will enable his firm to develop a single working prototype into a commercial reality.

As well as being a landmark for Epipole, it is also the first major deal for newly launched Scottish angel syndicate, Lancaster Capital.

Dr Robertson, who has patented his camera, believes it will revolutionise detection of the condition, particularly in India and other developing nations.

He added: “In the UK, we are lucky as we have gold standard healthcare, but in less-developed countries this is a huge issue as it is one of the nastiest parts of the diabetes condition and leads to blindness that could easily be prevented through early-intervention.

“We are now on target to go from an idea to reality in three years, which is exceptionally fast and wouldn’t have happened without the investment from Lancaster Capital.

“It was a brave step by them to get involved and I’m extremely thankful they quickly saw the potential in this camera and were prepared to put in the investment which will allow us to move to the next level.”

Hector Cameron of Lancaster Capital privately invested the original £55,000 Dr Robertson needed to set up Epipole and make his prototype.

Lancaster Capital opened to new members in February and ten of those new members contributed towards the £400,000 needed to take the camera to market.

Hector Cameron, chair of Lancaster Capital, said the syndicate had been established specifically to invest in exciting new technologies which are likely to result in products that make a positive difference to lives.

He added: “Epipole is a fantastic example of exactly the type of investment we want to make in young Scottish companies.

“Craig’s done a great job getting to this position, but there is still a long way to go and we are delighted to be supporting him as takes the product to the commercial stage.”

Dr Robertson came up with the original idea after working in the field of retinal imaging. He realised the only cameras available for this type of scanning were impractical in terms of portability, assumed generic use and cost, with individual units costing upwards of £40,000.

He has now patented his handheld camera and software, likely to cost under £1,000. It will also connect to laptops via USB, allowing doctors to beam results from remote and rural communities to anywhere in the world.

He said: “Our plan is to first target the Indian market where there has been an alarming increase in the level of diagnosed diabetes within the population, with approximately 60 million diagnosed and who knows how many more undiagnosed?

“In countries like India, many people do not discover this problem until they go to the doctor with fuzzy eyesight. By then it can be too late to save them from going completely blind.

“India has a population of approximately one billion and only one million clinicians. There are also around 660,000 villages that healthcare workers need to get round. This means they need a portable device and of course it needs to be easy to use and affordable.

“I’ve already spoken to clinicians in India and they are very excited by the camera and the software. We have also been offered trials in the UK, Malawi and Mexico so we know the demand is there. We are aiming at a market penetration of between five-eight per cent – but we’ve got a long way to go to get to that point.”

Dr Robertson urged others with similar innovative and entrepreneurial ideas to follow his lead and seek angel investor backing.

He said: “Lancaster Capital wanted to hear about the need for the product and also wanted to understand the potential impact it could have

The £400,000 from Lancaster Capital will now allow Epipole to build a dozen gold standard prototypes to be tested over the summer before hopefully releasing the final version of the camera it to the Indian market by the end of the year.

Lancaster Capital is a not for profit angel investment syndicate, currently looking for like-minded investors who are keen to back innovative Scottish projects that could make a real difference.

They offer a modern approach to investment in new business and are keen to hear about potential investment opportunities.

If you would like to see the original press release or find more stories, please, visit our website.