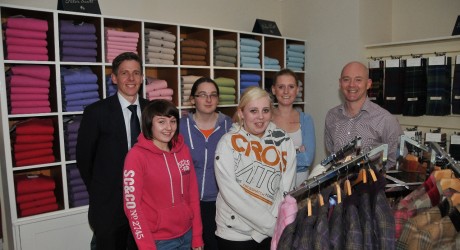 A BORDERS business at the heart of the area’s textiles heritage has backed wind energy developers who want to help local people break down the barriers that they face finding work.

Banks Renewables aims to improve access to jobs in the Hawick area, by providing local people and local firms with a new fund to boost training and workplace learning opportunities.

Now the renewables company’s Learning Working Earning initiative has been praised by Peter Scott Knitwear – which says the scheme could revive lost skills and help it to explore valuable new opportunities with demand for Scottish textiles on the rise.

The initiative will be rolled out as part of the Banks Renewables Community Partnership Fund if it wins approval for the proposed 15-turbine Birneyknowe Wind Farm, between Hawick and Bonchester Bridge.

Steeped in rich local history, Peter Scott Knitwear was established in Hawick in 1878 and has expressed its support for plans to create a Skills and Opportunities fund.

Alistair Young, operations manager at Peter Scott, said: “We were highly impressed with Banks Renewables presentation of its ‘Learning Working Earning’ initiative and it is definitely something that is of major interest to us.

“The knitwear industry has been crucial to the Hawick area for more than 130 years, although it has suffered in recent times with competition from cheaper labour markets.

“Thankfully, with the rise in demand for authentic Scottish produce, we have seen a fantastic growth in trade with our sales up 30 per cent in the past two years.

“This means we are now in a position to expand our workforce but are having to retrain two generations of lost skills to fill the gap.

“Banks Renewables’ proposed initiative could therefore not have come at a better time and we would be extremely keen to apply for funding.

“Due to the labour intensive nature of our work it can take up to a year to get an employee fully up to scratch, costing us on average around £15,000 so any help from Banks would be greatly appreciated.

“It’s fantastic to see that Banks Renewables is truly committed to making a valuable contribution to local businesses and people surrounding its proposed Birneyknowe Wind Farm and I hope that its plans come to fruition.”

The fund will give out grants to jobless people who are prevented from taking up work offers because they can’t afford vital tools, smart work clothes or protective equipment. It will also consider requests for help with transport and childcare costs.

Employers will also be able to apply for financial assistance to help cover the costs of taking on apprentices, or in supporting employees who are involved in work-based learning.

During an intensive, two-year period of public consultation local people said there was a void in employment and training opportunities in the area, which Banks Renewables hopes its initiative will address.

Phil Dyke, director at Banks Renewables, said: “We are delighted to have the support of such a prominent business in the Hawick area and it is fantastic that our proposal has potential to make a real and positive difference to lives locally.

“We’ve dedicated a lot of time to talk and listen to the community and what was made clear to us was that they are concerned about a lack of job and training opportunities.

“It was also apparent that many local job hunters are desperate to work, but can face difficulties accepting some jobs, because they can’t afford the basics like a smart suit to wear at interviews or the costs of travelling.

“It made sense for us to address this by dedicating a portion of the wind farm community fund to addressing this problem, so that we can make a real difference on an issue of local concern.

“Of course, this is just one of the many benefits the wind farm would bring and we believe that is why increasing numbers of local people and businesses are supporting our proposals.

“We’d encourage them to make their voices heard to the councillors and planning officials who will make the decision on whether the wind farm is given the go-ahead.”

In addition to providing green energy, Banks Renewables strives to provide communities that host its wind farmwith benefits that will make a meaningful, positive and lasting difference to the lives of those living closest to the sites.

In addition to the creation of training opportunities the community fund which could generate up to £300,000-a-year for the local area could also deliver direct funding into community groups.

During the construction of the wind farm, there will also be a variety of opportunities for local firms to tender for contracts ranging from construction and maintenance to hospitality.

To find out more about the proposed Birneyknowe Wind Farm visit http://www.banksgroup.co.uk/birneyknowe/.

Banks Renewables is part of the Banks Group (www.banksgroup.co.uk), a family firm founded in 1976, which now employs more than 420 people in the renewable energy, property and mining sectors.

The original press release, and many more, can be found here.