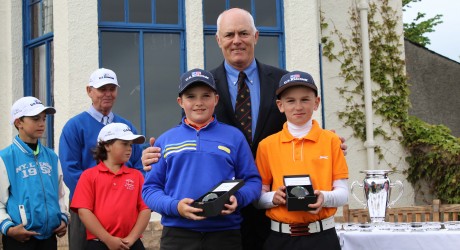 IT’S shaping up to be a battle of miniature Brits at this year’s U.S. Kids Golf European Championships as three of Britain’s leading golfing stars go head to head for the title.

While golf prodigies from all over the world will descend upon East Lothian for the prestigious tournament, the boys under 11 category looks like it will be an all British affair with the top three finishers from last year set to return to the championships.

At the 2013 tournament, Conor Gough, Dominic Clemons and Max Hopkins, took the respective podium positions and all have enjoyed more success since.

The three juniors are some of Britain’s best young golfing prospects and will join almost 600 other ‘pint-sized stars’ from around the globe when the tournament tees off at several East Lothian courses on 27 May.

Returning champ Conor, from Slough, is hoping to retain his title after going on to have a very impressive 2013 season, placing top of the order of merit in the under 12s category at the BB&O Futures Tour in his local county.

His major rival Dominic, from Melbourne in Cambridgeshire is looking to claim his title back from Conor. He finished a close second in 2013, but roles were reversed the previous year when Dominic drove to glory.

Third place last year was Max Hopkins who shouldn’t be counted out of the race just yet. Since the tournament he was chosen to participate in a competition in America and competed at the prestigious British Open Event in St Andrews in August.

With this clash of the tiny-titans taking centre stage, the championships are sure to be an event to remember long after the dust has settled.

However, it won’t be all competition amongst the Brits with Ryder cup style, Van Horn Cup teeing off immediately after the tournament.

The top finishers in each category will compete in the Van Horn Cup over Gullane No 1 on May 30 – a showpiece event where the best European players are matched up against the top golfers from the rest of the world.

In 2013, Conor partnered with Dominic to card a 63 in the ceremonial final day, winning them the Garth and Gill Morrison Medal for the event’s best score.

The top five finishers in each age and gender group of the European Championships also automatically receive an invitation to the U.S. Kids Golf World Championships at Pinehurst Golf Club, North Carolina, in August.

More than 560 young golfers have signed up for the competition – an increase of at least 50 from the 2013 event cementing its reputation as being one of the most popular European championships.

Dan Van Horn, president and founder of U.S. Kids Golf, said: “Our ambition has been to see the European Championship grow in strength from year to year, so to see registrations hit record numbers clearly demonstrates the growing reputation and quality of the tournament.

“We’re incredibly proud of the quality competition we have built in conjunction with the superb partnerships we have formed with golf clubs in Scotland. The European Championship is now a major fixture on the calendar for the world’s best young golfers.”

The U.S. Kids Golf Foundation, a Georgia non-profit recognized as a 501(c)(3) charity, was created in 2001 and provides services that include competition and instruction. The Foundation organises more than 750 golf tournaments for kids each year with over 10,000 individual players ages 5-18. These tournaments include Local Tours in more than 50 cities, ten qualifiers across the nation, seven regional championships, a European and Malaysia Championships and the U.S. Kids Golf World Championship and Teen World Championship, which are held each year in Pinehurst, N.C.

U.S. Kids Golf, LLC is based in Atlanta and manufactures equipment and related golf products designed for kids. It was created in 1997 when founder/CEO, Dan Van Horn, found that his children were losing their interest in golf due to not having the proper equipment. In addition to more than 4,000 golf shops and retail locations in the United States, the company’s products also are available in over 75 countries worldwide.

Should you were interested in more press releases about this and other stories, please, visit our website.