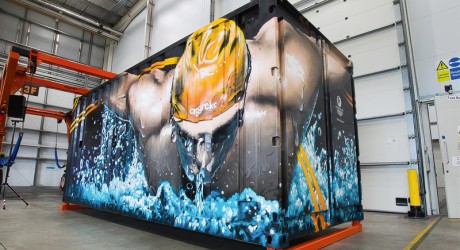 GLOBAL company, Aggreko, has commissioned MadeBrave, an award-winning creative agency, to design custom  artwork for one of their generators.

The Glasgow based agency created a bespoke piece of art for the 20ft Aggreko generator container  to celebrate the 2014 Commonwealth Games coming to the city this summer – an event that Aggreko will be supplying the temporary power for.

MadeBrave also produced a time-lapse video to capture the three-day painting process. The film and impressive artwork was revealed at a launch event held at Aggreko’s manufacturing facility in Dumbarton, attended by around 75 of Scotland’s business leaders.

“We are delighted that the work we have produced for Aggreko has created such a buzz around the Commonwealth Games. Everyone is thrilled with how both the container and film turned out and we hope to create an iconic piece of art for the city of Glasgow.”

Renowned Glasgow street artists, Rogue-One, sprayed the truly unique piece of art. You can check out the video here: https://vimeo.com/95492687.

2. MadeBrave won Best Performing Business for 1-10 staff at the Glasgow Business Awards and is a finalist in the Scottish Enterprise EDGE Fund.

4. Aggreko is a FTSE-100 company that is the world leader in rental of power and temperature control: http://www.aggreko.co.uk