Media Release: North-east businesses shortlisted for work in the oil and gas sector 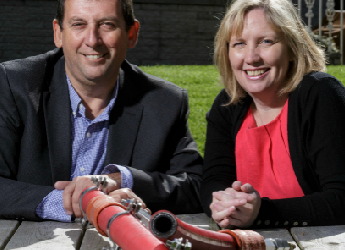 A TRIO of North-east businesses have reached the finals of prestigious business awards in recognition of their achievements over the last three years.

Blaze manufacturing Solutions of Laurencekirk, Aberdeenshire, Grampian Continental of Kinellar, Aberdeenshire, and Aberdeen headquartered Inoapps, are going head to head in the race to win the Business Success Over Three Years accolade in this year’s Grampian Awards for Business Excellence.

The competition, which is organised by Enterprise North East Trust (Enterprise) and main sponsor RBS Ahead for Business, aim to encourage enterprise by rewarding entrepreneurial companies and individuals that are capable of leading the future prosperity of Grampian.

Gary McEwan, chief executive of Enterprise, said: “Following a rise in applications in this year’s awards, judges had the hard task of narrowing the entrants down from 115 applications to just 27 finalists. These figures demonstrate that there is a high volume of talented entrepreneurs and businesses in the North-east.

“The business success over three years award category recognises companies that have been trading for more than three years, and Blaze Manufacturing Solutions, Grampian Continental and Inoapps have all demonstrated outstanding performance in growth and development since they were established.

“Each company has demonstrated personal bravery, tenacity, skill and hard work to become a success in their field, and we are delighted to see such a good variety of businesses reaching the final stages of the competition.”

The business success over three years category recognises companies that have been established for three years or more, and have demonstrated outstanding performance in growth and development.

All three contenders have a strong reputation within the North-east due to their roles in the area’s oil and gas industry. Here, we take a closer look at the finalists:

Blaze is a family owned business, which was launched in 2006 by Howard and Ann Johnson, and has rapidly established itself as a leading provider of fire safety protection and loss prevention solutions.

The company started with just two people working from a summerhouse, and today employs 30-full time members of staff and 100 contractors.

The specialist firm has continued to secure contracts with major names in the industry and has already won contracts worth a combined value of £15million this year. Due to the continued growth of the company, Blaze has relocated from its Stonehaven office to bigger premises in Laurencekirk, and has also opened an additional office in Kemnay.

Haulage firm Grampian Continental has raced its way to this year’s final following  another successful year. The business, which has now reached a £18 million turnover after five years in business, after initially starting up during a global recession. The company has five bases located throughout Europe and a fleet of over 120 trucks and trailers. Grampian Continental is heavily involved in the oil and gas sector within the North-east and liaises with companies regularly to ensure the highest standard of service is provided.

After sitting in the back seat, with a combined experience of 75 years experience in the road transport industry, company directors Gavin Murray, Neil Bremner and Michael Lacey decided to take the wheel in 2009 and drive the business down the road to success. Five years later, with over 900 customers based in the UK and Europe, mostly working in the oil and gas industry, the company is full steam ahead in continuing its success.

Software solutions specialist, Inoapps, was established in 2006 by CEO Andy Bird to deliver robust, resilent and powerful Oracle solutions. The company has gone from strength to strength since inception, and has clients in Europe, the Middle East, Africa and America. Since Inoapps’ inception, the company has grown from an oil and gas technology and hardware solutions provider to one of the world’s leading Oracle Platinum Partner and Oracle Applications specialists. It works with a diverse range of clients, including energy, engineering, construction, information technology, financial services, manufacturing as well as local and central government.

The firm continues to innovate, most recently launching its InFusion Oracle Accelerate solution – the perfect blend of Inoapps Oracle expertise and the power of the leading Oracle Fusion ERP cloud application – transforming back office operations for its global client base.

The winner of the Business Success Over Three Years award, which is sponsored by RBS Ahead for Business, will be announced at the black tie awards gala ceremony, which takes place at the Mercure Ardoe House Hotel and Spa on Thursday 26 June 2014.