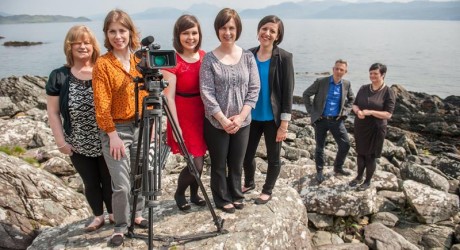 AFTER 25 years of London life, Young Films, the independent film and television company behind ‘The Inbetweeners’ has swapped the streets of the UK capital for a full-time base on the shores of Skye.

The business, owned by acclaimed producer Chris Young, who first moved to the island in the 90s, has also just returned from the Cannes Film Festival (14-25 May), where he was promoting the work of Young Films. And today (28 May) the Edinburgh Film Festival will announce that Young Films’ latest project – Gaelic drama serial, Bannan – will premiere as part of the international festival in June.

The ambitious firm is expanding its talented creative team on Skye with the help of Highlands and Islands Enterprise (HIE). The economic development agency for the region has provided grant funding of £106,000 to support an investment in five new staff.

Chris Young, Young Films producer, said: “This a very exciting time for Young Films. It has long been my ambition to integrate more fully Young Films’ Film and Television activity with the Isle of Skye and its people. Bringing together HIE and Creative Scotland in partnership with Young Films’ existing commissions from C4, BBC and BFI allows the company to expand significantly its workforce in Skye and to establish a substantial operation at FÀS – the Centre for Creative and Cultural Industries at Sabhal Mòr Ostaig.”

Bannan is BBC Alba’s first Gaelic drama serial. Unusually, the show will have its world premiere at the Edinburgh Film Festival on 28th June. “TV is the new film,” quips Young.

After its festival launch in Edinburgh in June, the first three half-hour episodes will air on BBC ALBA in September. And a further 15 episodes have been commissioned and developed by Young Films, with the first block of filming also set to start in September on location in Skye.

Young Films is also launching its latest feature film at Edinburgh Film Festival on June 21st, the first ever co-production between the Scotland and Portugal, entitled The Invisible Life. The film was in selection in Rome and Rotterdam earlier this year and this will be its UK premiere.

Chris added: “The new long running drama Bannan will provide a huge impetus for training and production. With a long running TV show and three new feature films set in Scotland to be produced by Young Films, it is certain that Skye will become a hub for film and television production in the future.”

The three films in development include an adaptation of the classic Neil Gunn novel The Silver Darlings by Olivia Hetreed, best known for writing BAFTA winners ‘Wuthering Heights’ and ‘The Girl with The Pearl Earring'; a new original Scottish drama written by John Collee, best known for ‘Master and Commander’, and finally Oscar-winning director, Kevin Macdonald’s next film.

The new team members are all looking forward to developing their roles from their island base at Fàs in Sleat.

Sarah Jane Campbell, originally from North Uist, is now living in Sleat and is a Senior Development & Production Executive at Young Films. She has worked in broadcasting since 1997, including numerous Gaelic television productions both at home and abroad.

Marsaili Shields from Stornoway has recently returned to Scotland having travelled in Australia for a year. Prior to that she worked in Glasgow for an independent production company.

Laura MacLennan from Barvas on the Isle of Lewis has returned to Skye having graduated from Sabhal Mòr Ostaig with a First Class Honours degree in Gaelic and Media Studies, where she was also awarded the Student of the Year in 2012.

Mairead Hamilton is from Sleat in the Isle of Skye and has recently graduated with a first-class Honours in Film & Television studies and Gaelic from Glasgow University.

Annette was brought up on the Isle of Skye and joined MG ALBA in 2009.

Caroline Forsyth, a HIE development manager based in Portree, commented: “Young Films’ reputation and its success in developing productions will have a significant impact on generating opportunities locally, regionally and throughout the Scottish film and television industry.

“We are delighted that home-grown talent is being nurtured in the area – first through education and training at Sabhal Mòr Ostaig and then through industry opportunities locally.

“The film and television industry is a hugely competitive arena. There is currently considerable collaboration between Young Films and the business and organisations that make up the media village in Stornoway. The continued strengthening of the sector will also benefit other parts of the economy – including tourism – which is a key focus for HIE.”