Media Release: Jock Stein documentary on BBC ALBA tells the story of the player, the manager, the man 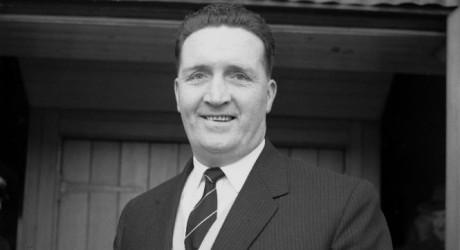 A NEW BBC ALBA entertainment documentary is to chart the rise of one of Scotland’s most revered footballing figures – from the coalmines of Lanarkshire to the pinnacle of European football and beyond – the story of Jock Stein.

Born in South Lanarkshire in 1922, John ‘Jock’ Stein would don the jerseys of Albion Rovers, Llanelli Town and Celtic throughout his playing career but it was his achievements in the dugout that ensured his place in Scottish and world football folklore.

His spells in charge of Dunfermline Athletic, Hibernian, Celtic, Leeds and Scotland led to both silverware – as the first British manager to lift the European Cup whilst leading Celtic to nine championships in a row – and accolades from players, pundits and fans, including posthumously being named Scotland’s greatest ever manager in 2003.

Yet it was from more humble beginnings that his path to success began. Prior to playing football professionally, he worked as a miner from the age of 15. As one historian points out, the traits required to survive in the pits were the same ones that embodied Stein’s football career.

Ellie Swinbank, historian at the National Mining Museum of Scotland, said: “These guys were tough. I think they had quite a black and white attitude to life. They were straight forward guys, down to earth and opinionated. They were physically strong. They were mentally strong.”

Stein’s first foray into football was with junior side Blantyre Victoria but even his friends in the pits, who would take in the Vics matches,  did not foresee his stellar career. As one mining colleague, Jim Gibson, describes: “He wasnae a great player but he wasnae a bad player. You know what I mean? He was in-between.”

Jock eventually signed for Albion Rovers, continuing to work in the mines full-time and play football part-time. After eight years with the Coatbridge outfit, he signed his first professional contract, travelling to Wales to join Llanelli FC. And as one of their fans explains during the programme, his short period with the club coincided with a successful spell for the Welsh side.

Stein’s wife Jean and daughter Rae joined him in Llanelli but they were devastated to learn that their house in Scotland had been burgled. Stein decided to give up football and return to Scotland and the pits. However, Celtic – on the recommendation of Jimmy Gribben – intervened, beginning another chapter in Stein’s career.

Yet, as broadcaster and friend, Archie Macpherson, describes, his big move wasn’t welcomed by all who knew Stein.

Archie said: “Jock was staying with his mother at that time and he in another room when his best pal – the pal who had grown up with him – came into the house. He didn’t know Jock was back in the house and he sat down with the mother because he knew the family very well. Jock’s mother said: ‘Oh by the way, John (as his mother called him) is through in the bedroom.’ ‘Oh is he?’ was the reply.

“Jock’s pal turned on his heel and walked out and never spoke to Jock again. That badly affected him. Tough man, though he was, that certainly affected him because it was about relationships, trust and loyalty.”

Stein signed for Celtic and quickly became captain, leading the club to victory in the Coronation Cup in 1953 and the League and Scottish Cup double in 1954.

However, by 1957 a serious ankle injury forced Stein off the pitch and onto the sidelines in his first coaching role, taking charge of the reserve team. Moving on to take charge of relegation threatened Dunfermline in 1960, by 1961 Stein had remarkably led his team to the Scottish Cup final.

Following a replay, his side beat Celtic to win the trophy and his players were not shy in crediting Stein with their success.

Harry Melrose, former Dunfermline Athletic player, said: “Jock was an overpowering character. The first time he walked into the dressing room there was a presence there. He was a big man, we know that, but his personality – he took over the whole dressing room. The way he spoke you felt, ‘I do mean something to this guy.’

“He made me a better player without even seeing me play. He just put the confidence into the players right from the first minute.”

Stein had ambitions to excel in Europe and managed this with the Pars, his side progressing in the Inter Cities Fair Cup by beating Everton and then coming back from 4-0 down to draw 6-6 with Valencia.

“At a play-off match in Lisbon, Stein’s side lost 1-0, but he tasted his first visit to the Estadio National where he would return in the European Cup final with Celtic in 1967.

“His success attracted the attention of Hibernian and he signed for them, once again making a quick impact by winning the Summer Cup.”

Pat Stanton, who played for Stein at Hibs before joining him at Celtic late in his career, said: “When he spoke to the players in the Hibs dressing room on his first day, he said, ‘There’ll be changes made here… but the players will make the changes.’

“So he just laid it on the line right away, but he didn’t come stampeding in, throwing the china about the place. He wasn’t like that.”

And it was Stein’s tenacity that led to Hibs recording victory over one of the most respected teams in Europe, with Stanton reminiscing: “Real Madrid! You had photographs of these chaps on your bedroom wall. It was like playing cowboys with John Wayne!”

Unsurprisingly, Stein attracted attention and he returned to Celtic as first team manager in 1965.

He started rebuilding Celtic and achieved domestic success immediately, but his sights were still very much set on Europe, wanting his team to embody the kind of football he had witnessed from Real Madrid at the 1960 European Cup final played at Hampden.

In 1967, Jock Stein’s ambitions were realised, leading his team to the European Cup final at the Estadio National against Inter Milan on May 25th. Celtic won 2-1, with Stein becoming the first British manager to win the European Cup.

In 1970, he took Celtic to their second final, this time against Feyenoord from Holland. This time, Stein’s men suffered a shock defeat.

Macpherson recalls: “In terms of the way the Scottish press looked at him, he was unbeatable. There was nobody better than him.

‘And then, suddenly, he looked as if he had got it badly wrong. If you’re up there on a perch and you fall, you fall with a crash because people did expect him to win that game.

Stein continued to dominate Scottish football, however, with his Celtic side winning a record nine championship titles in a row in 1974. But in 1975, Stein almost lost his life in a serious car accident. For those that knew him best, it was an incident that changed him.

In 1978, Billy McNeill took over as manager of Celtic with Jock Stein offered a job ‘upstairs’, he initially accepted before taking up a managerial post at Leeds.

This was short-lived, with Stein engineering a move to the Scotland national job within weeks to replace Ally MacLeod, as Archie Macpherson recalls in the documentary. And as Danny McGrain explains, he entered the post with the same lofty ambitions as he had whilst at Celtic.

However, with Scotland failing to progress beyond the group stages in 1982, the pressure to qualify for the 1986 World Cup was all the more significant. The campaign came down to the last game with Scotland requiring at least a draw against Wales on September 10th, 1986, to make a play-off match against Australia.

Both Graeme Souness and current Scotland boss Gordon Strachan share their recollections of that fateful night in Cardiff when, with a Davie Cooper penalty levelling the match and Scotland just minutes away from a result that would secure their play-off spot, Stein collapsed.

Scotland captain, Souness, witnessed the events as they unfolded, explaining: “I’m in the tunnel and there’s these swing doors into the treatment room.

“Dr Hillis, who was a cardiologist, was in there and as every time the door opened, I could see him working on Jock and Jock was sitting up on the table and he had the oxygen mask on.

“I thought he was looking at me, but obviously in that situation he wouldn’t be conscious completely. You could see that it was getting more and more frantic. And without going into any great detail, it was obviously not going well.”

Elsewhere, the news took longer to filter through, word finally breaking at an evening dinner hosted by Archie Macpherson, who recalled: “I went to the dinner and Don Revie’s son approached just after we’d been served our main course. He said: ‘My dad has been on the phone. He said Jock is dead.’

“They stopped the dinner and asked me to say something. It just snaps back, how bad it was, and I stood up and struggled my way through an appreciation of him.”

And as Macpherson later recounts: “I went out onto the streets and I met a Scottish supporter who said: ‘I wish we were out of the World Cup and have Big Jock back.’ I think that summed it up.”

‘Jock Stein’ celebrates the life and career of the man revered by Scottish football in a landmark film for BBC ALBA. Produced by purpleTV (www.purpletv.tv) and presented by Gaelic sport broadcaster Alex O’Henley, the documentary will be transmitted on channel on June 9th at 9.00pm and repeated on June 1oth at 10.00pm.