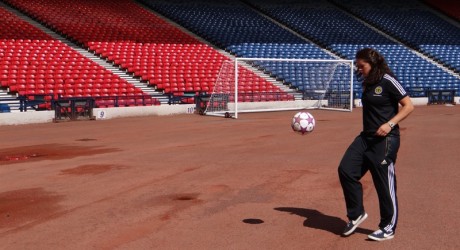 Coverage of the match from Fir Park, Motherwell, will start on Saturday at 4.50pm, with kick-off at 5.00pm, and will be presented by Calum Macaulay with analysis from former Arsenal manager, Shelley Kerr.

Commentary will be provided by Alex O’Henley.

Scotland currently sit top of Group 4 with maximum points from their first six games, three points ahead of their opponents Sweden who also boast a 100 per cent record in their five matches so far.

Saturday’s match is the first of a qualification double header, with a trip to face Northern Ireland in Belfast on June 19 next for Anna Signeul’s side.

The Scots will enter the fixtures in a confident frame of mind, with their last qualification tie a 3-1 victory away to Bosnia and Herzegovina. That match saw striker Jane Ross, who plays her football in Sweden, score her second hat-trick of the qualification campaign.

At half-time, midfielder, Hayley Lauder, talks about her experiences of playing and living in Sweden.

Hayley has been keeping a video diary for us and in addition to her extended interview, provides an exclusive personal insight into her life as a professional abroad.

We also speak to national coach, Anna Signeul, who talks about how the Scottish national side has been making massive strides in recent years, and how it is narrowing the gap to top sides like Sweden.

She reflects on the benefits of having Scottish international players plying their trade around the world in countries like Sweden, Germany, France and the USA and speaks passionately about her determination to deliver qualification to the World Cup in 2015 for the players and the game’s growing fanbase.

Coverage of the 2015 FIFA Women’s World Cup qualifiers is being produced for the channel by mneTV, with BBC ALBA providing a premier sports package that also covers action from the Scottish Premiership, Ramsdens Cup, live shinty as well as live PRO12 league rugby.

Coverage of the 2015 FIFA Women’s World Cup qualifiers is being produced for BBC ALBA by mneTV, one of Scotland’s leading sports production companies. (For further information see www.mnetv.tv).