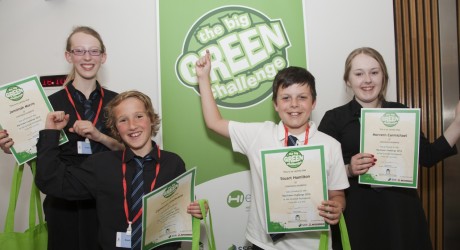 A TEAM from Charleston Academy in Inverness talked their way to the top prize on Friday afternoon (20 June) in a debating competition focused on renewable energy.

The victorious team of Jemimah Morris, Morvern Carmichael, Cameron Cochrane and Stuart Hamilton triumphed over teams from schools across the Highlands and Islands at the Scottish Parliament to win the Big Green Challenge 2014.

They took on a team from Portree High School in the final debate.

There was also a special prize for the team which had the best grasp of the technology.

This was won by Nairn Academy who the judges described as ‘the engineers of the future’.

The Big Green Challenge is an initiative developed by Highlands and Islands Enterprise (HIE). Pupils in S1-S3 take part in live debates with each other, focused on issues relating to renewable energy.

The aim is to encourage school pupils to research the vibrant renewable energy sector and learn about the different ways power can be generated.

This year’s event was sponsored by SSE Renewables and Mitsubishi Heavy Industries Europe.

The winning team will now take a trip to see renewable energy in action.

Rona Campbell, senior development manager, HIE commented: “The standard of the debates has been very high and it is really encouraging to see so many youngsters interested in renewable energy.

“It was very clear that each and every one of the pupils had carried out considerable research in preparation for the debates.

“It isn’t easy to stand up and speak in front of a room of people and in such a prestigious venue. But the pupils were more than able cope with the pressure.

“I’d like to congratulate the team from Charleston Academy on their success and I hope the competition has further sparked their interest in renewable energy and potential career prospects across the energy sector.”

They debated: “This house believes that funding the Scottish Government’s plan to meet 100 per cent demand for electricity from renewable energy by 2020 is the best way to secure Scotland’s future.”

For further information on the Big Green Challenge, log on to www.thebiggreenchallenge.co.uk

Photographs of the other teams which took part on the Big Green Challenge Grand Final 2014 are available by contacting kim.thain@hient.co.uk