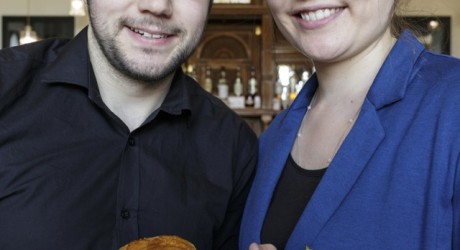 ASKING the public to help fund a business idea might sound strange – but is exactly how one small organic food café in Aberdeen became a success.

After the original owners of a popular eatery in Aberdeen’s Rose Street decided to sell their business, Lara Bishop, who managed the business at the time couldn’t say goodbye to the workplace she had grown to love.

Acting quickly, Lara decided to make it her own project to ensure that the Foodstory Cafe name lived on, and teamed up with a mutual friend, Sandy McKinnon, who also shared the dream of owning his own café.

A week after agreeing to buy the business, the duo were forced out of the Rose Street site due to unforeseen leasing issues, meaning they had a business, but didn’t have anywhere to put it.

They secured new bigger premises on Thistle Street soon after, but didn’t have enough money to sustain the company and kit out the new location.

Taking a leap of faith, they created a crowdfunding project and signed up to Kickstarter, an online crowd funding website. The pair were now more determined than ever to ensure the fundraising for the business was a success.

The Foodstory Cafe received phenomenal support from a global audience through the online crowd funding.

Donations from South America, Singapore, the United States and Australia came flooding in as well as local and national support, indicating that a large amount of people believed in, and were backing the business to succeed.

As a tribute to everyone who donated to the business each individual has their own book painted on the wall above the doorway as a thank you to them from the Foodstory Cafe.

The café, which is now located on Aberdeen’s Thistle Street is built from recycled materials and provides homemade, organic and locally sourced food.

Lara said: “We wanted to give something back to the people who helped us, so everyone’s names are now painted up above the doorway in a book, so that they are all part of the success story.”

The Foodstory Cafe continues to blossom and is one of the finalists in the Grampian Business Awards 2014, competing in the Most Promising New Business category. The awards, which are run by Enterprise North East Trust (Enterprise), along with headline sponsors RBS – Ahead For Business, consists of 28 contenders in the ten award categories, including young up-and-coming businesses, family owned enterprises and long established companies in the Grampian area.

Lara said: “Winning the award would mean so much to us, and would also be the perfect way of thanking the public for helping to make the business a success.”

With a new chapter beginning, the business is on target for their first successful year of trading and has grown to a strong team of 16. Lara and Sandy have invested in a second production unit as well as a company van.

After being so close to losing the business it is apparent that the ongoing success of the business highlights a positive future for the Food Story café.