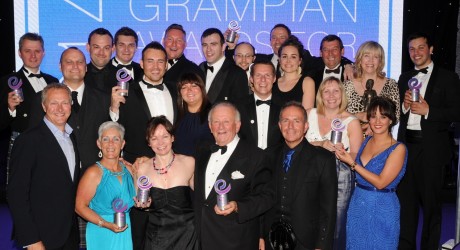 TALENTED entrepreneurs from a diverse range of industries in the area have been unveiled as winners in one of the North-east’s most prestigious business awards.

More than 400 people gathered for the 2014 Grampian Awards for Business Excellence, which are run by Enterprise North East Trust (Enterprise), along with headline sponsors RBS – Ahead For Business, which took place last night (Thursday 26 June) at The Mercure Aberdeen Ardoe Hotel and Spa.

This year’s winners include young up-and-coming businesses, family-owned enterprises and long established companies from a variety of sectors in the North-east including hospitality, childcare, IT, and the oil and gas industry.

Dr Deborah O’Neil, chief executive and scientific officer of NovaBiotics, a specialist healthcare company that has created a range of treatments for fungal and other difficult to treat infections was named Entrepreneur of the Year.

“Dr O’Neil has shown great enthusiasm and persistency for her scientific and commercial work in the region since the company’s inception in 2004, and will join other notable local entrepreneurs in the Enterprise ‘Hall of Fame’ in recognition of her dedication to the biotechnology and pharmaceutical sector.

Top North-east hotelier Stewart Spence of The Marcliffe Hotel and Spa was presented with the prestigious Lifetime Achievement Award for his dedication to tourism and hospitality in the North-east.

Mr Spence has owned seven different hotels and restaurants over the course of his successful career and is a dedicated patron of numerous charities based in the North-east.

Gary McEwan, chief executive of Enterprise, said: “This is the second year we have presented the Lifetime Achievement Award to a notable figure from the North-east business community, and Mr Spence received the accolade for his contribution towards tourism, and his dedication to supporting young people with potential in the industry.

“This is the first time the Entrepreneur of the Year accolade has been presented to a female, and Dr O’Neil, who has more than 100 patents under her belt, will join six other notable entrepreneurs in the Enterprise ‘Hall of Fame’ in recognition for her notable work in the area.

“The awards showcase new businesses, multi-generational businesses and everything in between.  We received a record number of entries this year from talented entrepreneurs and businesses in the area, and applaud the achievements of all of our finalists and winners and wish them every success in a future that looks bright for the North-east.”

Mike Fergusson, director of commercial banking, said: “Congratulations to all the winners of this year’s Grampian Awards for Business Excellence.

“The event is one of the rare occasions at which we can showcase and recognise the outstanding business contributions made by individuals and businesses in the North-east.

“The commitment and passion shown by the winners and indeed all the finalists is truly inspiring and all the more outstanding given the current economic climate.

“It clearly demonstrates the talent and diversity within the region.

“Special thanks should also go to Gary McEwan and the team at Enterprise for organising such a truly memorable occasion.”

Winners are as follows: