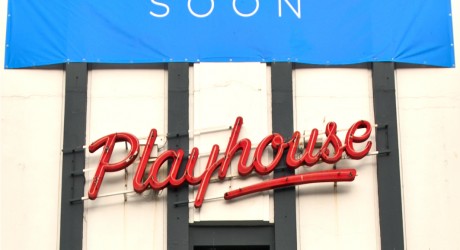 COUNCIL officials have heralded a new state-of-the-art IMAX experience which opens in July as a much-needed attraction set to boost tourism in Perth.

The eagerly anticipated development – which will bring the ultimate cinema experience to movie fans – represents a multi-million pound investment in the town and region by Playhouse owners, G1 Group.

The agreement between G1 Group and the IMAX Corporation will see the Playhouse transform into a must-visit for cinema-goers and play an integral part of the council’s £50 million investment into cultural and leisure attractions over the next five years.

This investment will be key in transforming the Fair City into the one of the most desirable places in Scotland with G1 Group leading the way with its summer launch of the new screen.

Councillor John Kellas, Convener of Perth & Kinross Council’s Enterprise and Infrastructure Committee, said: “Perth and Kinross Council are delighted that Imax is coming to Perth Playhouse to provide a fantastic attraction for residents and visitors alike.

“This, along with the £50 million-plus worth of investment in cultural and leisure attractions over the next five years, all significantly add to our vision of developing Perth into the most desirable place in Scotland in which to live, work, invest and visit.”

Work on the redevelopment of the B-Listed art deco building in Murray Street will involve the transformation of Screen One as well as an extensive refit of the cinema’s interior and food court.

Ken Creelman, G1’s cinema development manager, said the venture will attract visitors from across Perthshire, Tayside and Fife and central lowlands to the city which will also provide a financial boost to other local businesses.

He said: “The IMAX experience doesn’t just provide a new and exciting experience for our customers, but it will also have a very positive impact on Perth itself.

“We hope that visitors will come from further afield to the cinema which will then benefit surrounding businesses such as restaurants and bars within Perth city centre.

“A great deal of investment is going into the city over the next five years so it is a very exciting time for us to launch the cinema, further cementing our investment in Scotland, adding to existing locations including Dundee, Aberdeen and St Andrews.

“We will be making further announcements very soon on the launch which we are all thrilled to see take place in the next couple of weeks and hope to see people travel from across Scotland to see what Perth really has to offer.”

The IMAX screen is expected to be launched this summer with the first screening of one of this year’s most anticipated summer blockbusters. Typically IMAX cinemas show new release movies in advance of standard cinemas with viewers having the added benefit of larger screens, sharper picture, better sounds and immersive 3D experiences.

Designed by Kingussie-based architect Alexander Cattanach Jr, the Playhouse – which has seven screens – first opened in 1933.