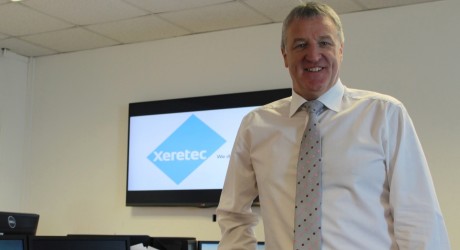 A LEADING business services firm has launched a new Glasgow office to meet growing demand from clients across the Central Belt.

The Xeretec Group has recently opened an office at the city’s Riverside Braehead Business Park, as part of its on-going business growth strategy to become one of the leading reprographics providers in the Central Belt.

The Glasgow office, which is located next to the official Xerox headquarters in Scotland, will work in partnership with them, sharing the building and its modern showroom facilities to showcase its products.

The firm has already won contracts worth in excess of £350,000 in the area, and the new 2,300 sq ft office premises, currently has seven employees, including sales manager, John Hamilton, who has a wealth of knowledge and experience in the industry.

It is expected that there will be a number of employment opportunities in the future, as demand for its range of office products and services increases.

Mr Sheran, said: “The Xeretec Group has been consciously trying to grow and expand its Scottish operations over the last two years, so opening a Central Belt base strengthens our position to become the leading Xerox partner in Scotland and the UK.

“The new office in Glasgow, will complement our offices in Aberdeen, Edinburgh, Inverness, Dundee, Elgin, and allow us to have full coverage in Scotland. It will also allows us to work closely with Xerox so we can further enhance our products and services for our existing and future customers.”

The Xeretec group, a leading integrator of digital print hardware, software, solutions and services in the UK and Ireland, acquired North East Reprographics and its other Scottish offices in Edinburgh, Inverness, Dundee and Elgin in 2012.

The growing firm will eventually all come under the Xeretec Group.