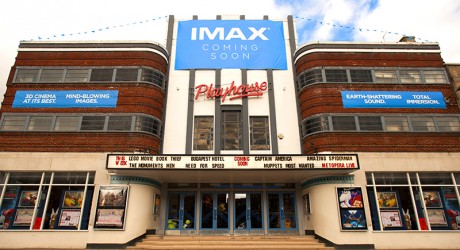 THE big screen has literally arrived in Perth as a new IMAX experience approaches its final stages of completion.

The new state-of-the-art IMAX screen- 60 per cent-plus larger than the cinema’s previous screen- has been lowered in via a special hoist ahead of the 5 July launch at the Playhouse in Perth.

Transformers 4, the biggest US blockbuster to date, will kick off the opening day with a bang with showings from 10am until late.

But it is not just an experience for the eyes, as a four sub ‘sonics’ sound system will also provide cinema-goers with some of the world’s sharpest sound technology adding to the action-packed movies on the big screen.

The eagerly anticipated development by Playhouse owners, G1 Group, is part of a wider £60 million investment in the town and region set to attract more visitors to the area.

Ken Creelman, G1’s cinema development manager, said: “We are thrilled to announce the launch of the Perth IMAX on Saturday. A great deal of investment is being injected into Perth over the next five years so we hope this will be the start of many other exciting ventures to come to the city.

“We’ve put a lot of work into turning the Playhouse back into a must-see attraction for both locals and tourists coming from further afield.

“We have one of the US’s biggest movies lined up for the launch which will hopefully suit everyone from young families to couples and action-seekers wanting to get the true IMAX experience.

“The size of the new IMAX screen- or for true action movie fans, the real-life equivalent to the Transformers robot, Optimus Prime- will allow movie goers to really feel that they are part of the movie, so we’re looking forward to hearing and seeing the reaction from the launch.”

It is hoped that the new venture will attract visitors from across Perthshire, Tayside and Fife and central lowlands to the city which will also provide a financial boost to other local businesses.

There will be a supplement cost for IMAX films but Perth Playhouse is very competitively prices compared to the only other Scottish IMAX screens in Edinburgh and Glasgow.

Ken added: “We’ve still got a few more announcements up our sleeve following the grand opening on Saturday.

“We want to inject as much fun and excitement back into Perth as possible and look forward to surprising our visitors from across Scotland with what’s happening next.”

Designed by Kingussie-based architect Alexander Cattanach Jr, the Playhouse – which has seven screens – first opened in 1933.