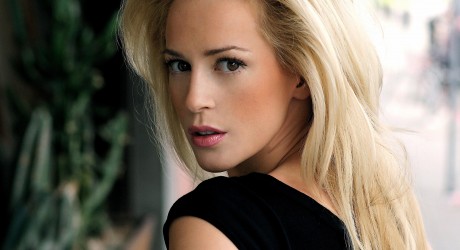 RISING Hollywood star, Louise Linton, has landed the lead role in a new rom com which sees her transformed from a soon-to-be married girl next door into a ‘dating vigilante’.

The Scots actress says she was thrilled with the part of a good girl gone bad in Serial Daters Anonymous, which is due to be released later this year.

Louise, who grew up just outside Edinburgh and moved to Hollywood eight years ago, hopes the starring role opposite House of Cards and Gossip Girl heartthrob, Sam Page, will be her biggest hit to date.

In the movie, she plays Claire, a fashion columnist who jilts her husband-to-be at the altar, after discovering he cheated. She then goes on a retaliatory dating streak, determined to give men their comeuppance.

However, matters become even more complicated when she reconnects with her first love – played by Page. The movie has been billed as a classic, all-American rom com in the style of Runaway Bride meets This Means War.

She said: “I loved playing this role because Claire has such a powerful character arc. She goes from being a sweet naive Midwestern girl to overnight turning into a bright fierce woman hell-bent on revenge against men.

“She goes through a wild transformation both in her personality and the way she dresses. That meant there were 30 plus wardrobe changes, so the costumes were great fun.

“I also loved working with Sam Page who played my love interest. He’s just finished a role on House of Cards with Kevin Spacey and was a very entertaining guy and easy to get along with.”

The movie, which sees one of the men she dates brand her a ‘dating vigilante’ starts with her going on a massive bender after scuppering her own nuptials – while still wearing her flouncy wedding dress.

She added: “It was great fun to film and really went from the sublime to ridiculous. There was a very funny scene where I had to climb out of a car window in a wedding dress – a huge, fluffy Princess number with mounds of lace and taffeta.

“Trying to climb out of a car window gracefully in that outfit was impossible and gave everyone a giggle and hopefully it will make audiences laugh.”

“But I wasn’t laughing in the next scene, when my character wakes up with a monster hangover, still wearing the very dirty and dishevelled wedding dress.”

Filmed over a month in Milwaukee, Wisconsin, the movie is expected to release in US cinemas in late 2014 and in the UK in January.

The comedy role caps a busy year for Louise, who has also just completed filming a part in the eagerly-anticipated biopic of Howard Hughes, which is being directed by Tinsel Town legend, Warren Beatty.

In August, she will film the female lead in Echo Effect, a political action thriller set in Louisiana, while she is being tipped to star in the remake of a major classic horror which will film Winter 2014 and be released in cinemas internationally in 2015.

In April, she was in New York as a speaker at the KILTR televised debate on the Referendum, while May saw her jet into the Cannes Film Festival, where she was at the Vanity Fair party with 100 Hollywood movers and shakers, including Cate Blanchett, Jennifer Lawrence and Naomi Watts.

Issued on behalf of Louise Linton by Holyrood Partnership. Further information on 0131 561 2244 or info@holyroodpr.co.uk