Media Release: The sky’s the limit for resident dare-devil 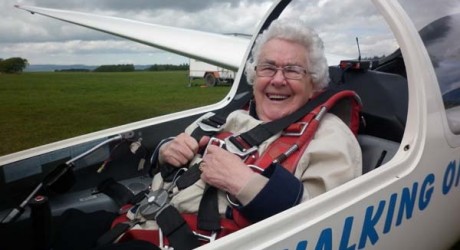 AN Edinburgh thrill-seeker has proved the sky’s the limit after flying across Loch Leven and the surrounding countryside in a glider – at the tender age of 90.

Dare-devil, Betty Lyons, who has lived at Bield’s St Andrews Court in Uphall for over ten years, decided to sign up for the sky-high challenge after being approached by the Scottish War Blinded Society.

Betty, an ex-RAF secretary, joined the armed force during the Second World War in 1941, later earning her membership with the society that works with visually impaired individuals.

Despite never flying a glider in her life, brave Betty took to the skies not wanting to pass up such a high-flying opportunity.

She said: “Flying through the skies above Loch Leven was one of the most exhilarating experiences I have ever had.

“Last year, I was ill so couldn’t attend, so when the society put the list up this year for volunteers, I was one of the first to put my name down. I was the only woman who did but I think that you can never be too scared, or old for that matter, to try new things.

“I didn’t feel at all nervous before take-off though, I was actually just excited to be given the chance to do such a thrilling experience.

“I have trouble with my vision nowadays but I still managed to see a lot of sights and the wonderful Scottish countryside was breath-taking.

“Staff from St Andrews Court were extremely supportive in the lead-up to the event and really pushed me to go for it. If the opportunity arose to do it again, I would in a heartbeat.”

Despite recently touching down, Betty has already signed up for her next thrill-seeking adventure of acoustic shooting where she fires a gun at a target every time a whistle blows.

“She has no problem with throwing caution to the wind and trying new experiences which is what we love to see in our residents.

“At Bield we want our residents to live their lives as independently as possible and embrace any passions or desires that they have.

“Betty is an outstanding example of this and we all look forward to supporting her through her next set of adventures.”

Bield is a registered charity which provides housing and care services for older people in Scotland. Starting out with only one housing development in Bo’ness, Bield has been around for 40 years and is now one of Scotland’s leading care home providers. Bield serves over 20,000 people across twenty two local areas.