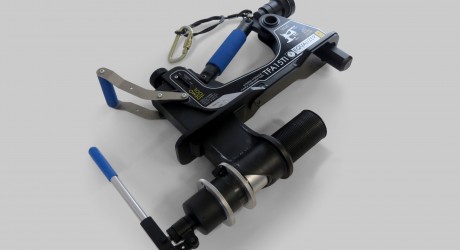 EQUALIZER International, a world leading designer and developer of flange maintenance tools for the energy industry, is increasing its presence in the growing global renewables sector through the introduction of an innovative new alignment tool for wind turbine towers.

Equalizer has drawn on its extensive knowledge and expertise in pipework alignment to develop its new Wind Turbine Tower Alignment Tool.

This tool will be used to resolve bolt hole misalignment on flanges within the inside of wind turbine tower sections during assembly or installation.

The tool, believed to be the first of its kind in the market, was developed in direct response to a request from European wind turbine manufacturing major, Siemens Wind Power, via Equalizer’s Danish distributor, Hytor.

Equalizer, which has an international reputation for innovation and development of flange alignment tools, took the development of this new tool from concept to delivery in less than ten weeks.

Wind turbine towers are made up of pipe sections with internal bolted flange connections and sometimes during fabrication these sections can become ovalised.

This can result in misalignment of the bolt holes, which increases the difficulty and lengthens the time taken to assemble the towers. The new tool will address this issue and make assembly and installation simpler, safer and more efficient.

Ian McCormick, chair and managing director of Equalizer International, said the company is well-poised to support the growth of the renewables industry.

“The expertise which we have developed over the past 20 years in the oil and gas industry is very transferrable to renewables both off and onshore,” he said.

“Both sectors face similar issues in pipework and flange alignment and maintenance.

“Our tools are already used in the renewable sector but this is the first developed specifically for the Wind Energy industry.

“We were able to react very quickly to meet Siemen’s requirements and we will be equally responsive to other requests from industry.

“The new turbine tower alignment tool follows the same principle as all Equalizer tools in that it will deliver significant safety, time and cost saving benefits and it can be used by any company involved in the manufacture or installation of wind turbine tower sections.”

Earlier this month, Equalizer International won the Energy Innovation of the Year award in the East of England Energy Group’s (EEEGR) Innovation Awards, held annually to recognise pioneering ideas and ground-breaking technology which can benefit the energy industry.

• Equalizer International is celebrating its 20th anniversary this year. It was established in Aberdeen, Scotland, in 1994 and opened its Houston office in April 2013.

• It is one of the world’s leading designers and suppliers of flange maintenance tools for the oil and gas, petrochemical, nuclear, water, mining and renewable energy sectors.

• The company has designed and developed more than 20 flange maintenance tools. It has also developed a range of hydraulic and mechanical pumps and power lifting tools.

• Equalizer International’s tools are distributed globally to more than 40 countries and are used by many of the world’s biggest energy producers and contractors.