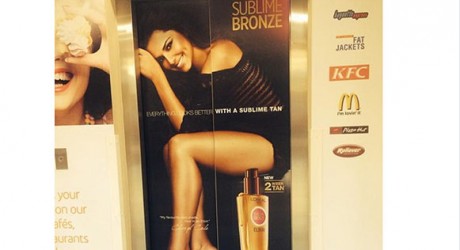 CHERYL Cole may have secretly married only two weeks ago and just seen her new single rocket to No.1 in the download charts, but she’s still taken time out to tweet about the LIFTS in a Scots shopping mall.

The singing star and X Factor judge re-tweeted a photograph of herself on a giant poster covering the doors of an elevator at the intu Braehead shopping centre in Glasgow to her 4.6 million followers on Twitter.

A teenager from Dedridge, in Livingston, West Lothian, Taylor Toal had tweeted the picture of Cheryl on the lift doors and, within a minute. the former Girls Aloud singer had replied to her saying: “Hey, just chilling over there by the lifts.”

Taylor, 15, who is followed by Cheryl on Twitter, was at intu Braehead at the weekend with her family, shopping for her summer holidays when she saw the poster of her idol covering the height and width of a lift door in the upper mall.

Taylor explains: “I’ve been a huge fan of Cheryl since I was about eight years-old and we follow each other on Twitter. It was such a great picture of Cheryl on the lift doors that I thought I just had to tweet it.

“Within a minute Cheryl had re-tweeted the photo and sent me a message. I was really excited she had got back to me so quickly, especially as she has millions of followers.”

Cheryl has been hitting the headlines recently with her return to X Factor as a judge, getting married to Frenchman Jean-Bernard Fernandez-Versini in a secret ceremony on the island of Mustique and her new single, Crazy Stupid Love, topping the iTunes download charts on Sunday – the day it was released.

The song is also expected to hit No.1 in the national singles chart later this week.

Taylor is such a huge fan of Cheryl that she stood outside the Assembly Rooms, in Edinburgh, earlier this month for more than 14 hours to see the singer as she arrived for the filming of X Factor auditions.

And Taylor got her wish, with the star taking a ‘selfie’ of herself and Taylor on the teenager’s phone.

Taylor said: “I was there from almost six in the morning to eight at night and it was great to speak to Cheryl.

“When I met Cheryl, she made you feel that you were talking to an old friend. She’s really nice.”

Cheryl had previously visited the intu Braehead mall in 2009 when X Factor auditions were being filmed at the adjacent Braehead Arena.

Assistant marketing manager at intu Braehead, Christine Macdonald, said: “The photograph of Cheryl on the lift doors is quite stunning and well done to Taylor for tweeting it and getting a reply from Cheryl so quickly. That was amazing.

“It’s not often you get a big star tweeting about the lifts in a shopping mall, but we like to think there’s always something interesting going on at intu Braehead.

“After the lift doors being seen by the millions of Cheryl’s twitter followers, we might even think about naming the elevator – The Cheryl Cole Lift!”