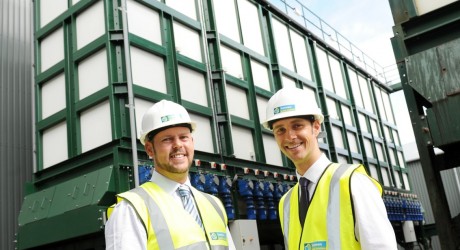 A LEADING North-east organics recycling firm has invested £600,000 in its specialist fleet of lorries to meet demand from its growing customer base, following the introduction of new waste regulations in January.

The move comes after Keenan Recycling, of New Deer, Aberdeenshire, doubled its commercial food waste customers to more than 1,400 since the Waste Scotland regulations came in to force over six months ago.

The major investment brings the number of specialist lorries in the fleet to five, with another lorry on order.

The specialist firm is dealing with an additional 100 tonnes of waste per week and the new fleet will help with the rapid rise in collections.

All Scottish hotels, restaurants, shopping centre food courts, canteens, shops that serve food, supermarkets, nursing homes and hospitals producing more than 50kg of food waste per week are now required to separate it from landfill and recycle their food waste.

Following the introduction of the new regulations, the government also increased landfill tax for the seventh year by £8 from £72 to £80 per tonne in April, which will also have a huge impact on businesses disposing of waste through landfill sites.

The environmental tax, which is paid on top of normal landfill rates by any company, local authority or organisation, is intended to encourage alternative means of waste disposal, such as recycling.

By January 2016, any businesses producing more than just 5kg of food waste per week will need to recycle it.

Keenan currently process more than 60,000 tonnes of organic waste per year at its award-winning facility, developing BSI-accredited soil improver for agriculture and horticulture use.

Around 20,000 tonnes of this is food waste, and each new lorry will enable the company to collect an additional 2000 tonnes of waste per year.

Managing director of Keenan Recycling, Grant Keenan, said: “A recent report from the government highlighted that 90 million tonnes of food is being wasted across the EU each year.

“Although we have seen the number of businesses using our food waste recycling service double since January, a high number of people are still choosing to ignore the regulations.

“Recycling waste not only helps businesses reduce the associated costs of waste management and divert waste from landfill, but it reduces the extraction and use of the earth’s natural resources, saves energy and mitigates the effects of climate change.

“Increasing the number of lorries in our fleet will allow us to cope with the rise in demand as more businesses start to follow the rules.”