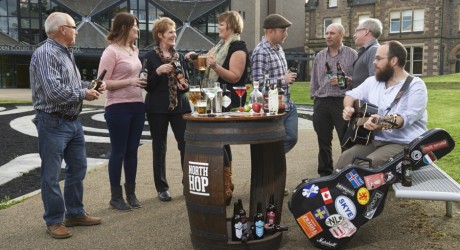 A HOST of up-and-coming Scottish bands and artists will have the chance to gain vital exposure at one of the country’s top venues next month as part of a new craft beer festival.

The first ever North Hop festival will be held across two days at the end of August at Eden Court in Inverness showcasing the very best in Scottish craft beer, cocktails and gins, artisan food and homegrown music.

Friday, 29 August, will be headlined by Lionel, a four-piece alternative/rock band from Inverness who will perform at North Hop hot off the stage of the Belladrum Tartan Heart Festival.

Huntly trio, Daydream Frenzy, will also take the stage over the weekend as hype around the group continues to grow.

The band are set to support Big Country later this month and have already gained publicity after Tom Delonge from Blink 182 mentioned in an interview that he is a fan and their latest video was featured on TV music channel, Scuzz.

Singer and guitarist, Donald Barclay, said: “It’s really important for us to play festivals like North Hop as live performance is one of the most important parts of being in a band.

Festival organiser, Michelle Russell, said: “Three things that Scotland does really well are beer, food and music and we will have all three and much more during North Hop.

“With around 1,000 tickets released for the festival there will be a large crowd to listen to all the bands and artists and we are delighted to be providing another platform for them to showcase what they can do.”

Ten craft breweries, as well as drinks companies and food producers from across Scotland, will be exhibiting at the festival which will run from 4pm until midnight on Friday, 29 August, and from noon until midnight on Saturday, 30 August.

The event is strictly over 18s and tickets and information are available via the North Hop website www.northhop.co.uk or by calling the booking office at Eden Court on 01463 234234

Issued by Frasermedia Ltd on behalf of North Hop