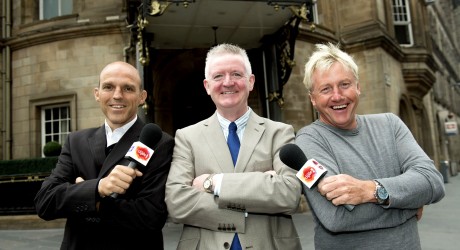 THE Scottish league football season is back with a bang this Saturday – and the Bauer Group has scored an early victory by sealing a deal which sees the return of live, full match commentary to its stations across Scotland.

Listeners from across the country will be able to tune in to their local stations every Saturday afternoon throughout this season to hear how their favourites are faring.

The new deal between the SPFL and Bauer includes:

Both the live commentary and the goal flashes will be available on DAB (digital radio) and simulcast (a simultaneous transmission of the same programme on TV).

Graham Bryce, managing director for the Bauer Group in Scotland, said: “We’re absolutely thrilled to be able to bring the very best of Scottish football to listeners across Scotland this season, including the return of live commentary every Saturday afternoon.

“Our stations throughout Scotland live and breathe the lives, passions and interests of our communities and nothing reflects this more than football.

“The first season of the new SPFL brought with it a huge level of excitement and drama across the leagues and there is great anticipation for more of the same starting this Saturday, particularly in the Premiership and Championship.

“With live commentary, instant goal flashes and some of the best commentators and pundits in the business, our stations can’t wait to prove that we are the top team for Scottish football delivering the very best and most relevant local content to listeners.”

Neil Doncaster, SPFL chief executive, said: “We’re delighted to be working with the Bauer Group once again to help bring matchday coverage of Scottish football across the leagues to fans throughout the country.”

Listeners in Glasgow and the West of Scotland can also look forward to the return of Clyde 1 & 2 Superscoreboard and its famous football phone-in when the programme returns to the airwaves this evening (Monday, 4 August) at 6pm.

Jim Delahunt, Superscoreboard host, added: “There’s nothing quite like the build-up to a new Scottish football league season and we’re all counting down to the big kick-off.

“What makes our jobs such a joy is the engagement, banter and opinions we love to share with listeners throughout the season and the addition of the live commentary option is a big thank you to each and every one of them for their ongoing support.”

The Bauer Media Group is one of the most successful media companies in the world. More than 570 magazines, over 300 digital products, and 50 radio and TV stations reach millions of people around the globe. The company’s portfolio also includes printing companies, postal services and services in the fields of distribution, marketing and media sales.

The Group’s turnover is stable at more than two billion euros. With a new global positioning strategy, the Bauer Media Group underscores its passion for people and brands.

The claim We Think Popular highlights Bauer Media Group’s focus as a publisher of popular media and provides inspiration and motivation to its more than 200 million consumers in 16 countries.