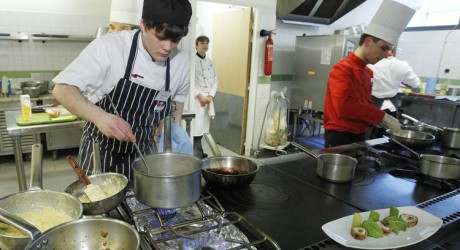 WINNING or reaching the finals of industry awards is a valuable way of promoting a company and its staff.

Entering awards can open up countless opportunities to businesses and allows them to truly outline their success to their customers.

Business success stories are not uncommon, but when a young individual is highlighted for their impressive talents, it outlines the positive development of staff within a company.

Alan Clarke, a 22 year-old junior sous chef at the prestigious Mercure Aberdeen Ardoe House Hotel and Spa, is a prime example of this success after being named as a finalist in one of the North-east’s most respected business awards.

The young chef, who was named Young Ambassador in the Aberdeen City and Shire Tourism Awards earlier this year, has been shortlisted as a finalist in a The Northern Star awards, in the Rising star category.

Alan, who has continuously impressed industry professionals with his culinary skills, also contributes to the overall development of the kitchen and Ardoe.

He believes that one of the main factors contributing to his success streak is having the support of a motivational and inspiring mentor.

Alan said: “Winning awards is a great morale boost for myself and the team. The fact that it is my superiors who are nominating me for these awards is a huge achievement and compliment in itself.

“I’m very lucky be a part of such a strong, motivated team who are always helping and encouraging me to develop my culinary skills.

“I’ve learned a lot from the different chefs that I work along side, especially the head chef who has mentored me since I stepped into the kitchen.

“I’m continuously learning from the experienced team and enjoy passing my knowledge on to the junior team.”

Developing younger members of staff has continued to have a positive effect on the businesses, and by encouraging staff progression, Ardoe has continued to grow and develop its brand reputation throughout Aberdeen and the surrounding areas.

Hotel manager, Peter Sangster, said: “It is really important for an organisation to ensure that staff development is one of their main focuses. We encourage staff progression at all stages within our workforce and are always looking for new opportunities to highlight our staff’s expertise.

“Alan has climbed the career ladder at a notable speed and is already helping to develop junior members of staff, teaching them his learned skills and encouraging them to develop new skills. It’s very refreshing to see.”