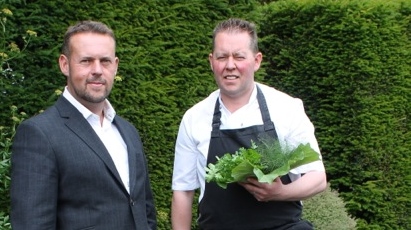 A LEADING North-east organics recycling firm is helping one of the region’s top restaurants celebrate ten years in business with a full circle approach to sourcing produce.

Keenan Recycling, of New Deer, which currently process more than 60,000 tonnes of organic waste per year at its award-winning facility, collects waste from Eat on the Green, at Udny Green, near Ellon, and turns it into BSI accredited soil improver which is used to grow herbs and vegetables for the restaurant.

The specialist recycling company has doubled its commercial food waste customers to more than 1,400 following the introduction of Waste Scotland regulations in January, and has invested in new lorries to cope with demand.

All Scottish hotels, restaurants, shopping centre food courts, canteens, shops that serve food, supermarkets, nursing homes and hospitals producing more than 50kg of food waste per week are now required to separate it from landfill and recycle their food waste.

Keenan collects all organic waste from Eat on the Green, including left overs from food prep, paper towels and scraps and turns it into nutritious compost.

Leading Scottish chef, Craig Wilson, who runs Eat on the Green with his wife, Lindsay, then uses the compost to grow a variety of ingredients which form the basis of the dishes served at the restaurant.

Grant Keenan, director at Keenan Recycling, said: “When the new food waste regulations came into effect in January our business almost doubled in size overnight with businesses across the North-east and Highlands rushing to comply.

“Craig and the team at Eat on the Green came on board early, almost a year and a half ago, and are now reaping the rewards, and it is great to see the fantastic vegetables and herbs our compost is helping to produce being enjoyed by hundreds of diners every week.”

Mr Wilson, said: “We were really keen to get involved with recycling our organic waste as early as possible as we saw the benefits to us as a business as well as the environment in doing so.

“We are extremely lucky to have so many amazing ingredients growing right on our doorstep.

“After sending our organic waste such as food and paper to Keenan it is turned into compost which we use in our herb garden and also by a local farmer to grow vegetables for the restaurant, so we really are going full circle.

“It also supports our local economy by trading with businesses like Keenan Recycling and local producers.”