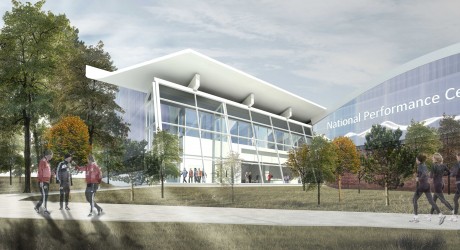 BOWMER and Kirkland has been appointed as preferred contractor to build Scotland’s new National Performance Centre for Sport at Heriot-Watt University’s Edinburgh campus.

The £30 million project, developed through a partnership between Heriot-Watt University, the City of Edinburgh Council and sportscotland, will include a new, full-size indoor 3G synthetic pitch for football and rugby, a nine-court sports hall, grass and synthetic outdoor pitches as well as a high performance wing that includes areas for hydrotherapy, strength and conditioning, rehabilitation, elite changing, office accommodation and a classroom.

It will allow for grassroots development through to high performance training.

Edinburgh-based architects, Reiach & Hall, have created an iconic building design. A key feature of the design is the centre’s roof, which is inspired by the angle and trajectory of what is recognised as one of the greatest goals in football history – Brazil’s Roberto Carlos’ goal against France in 1997.

Shona Robison, Cabinet Secretary for Sport, said: “The National Performance Centre for Sport will complement Scotland’s existing excellent sporting facilities, and we can all be pleased with the progress of this extremely significant project.

“Having tremendous facilities is an essential component of Scotland’s world-class performance system which delivered so emphatically with Team Scotland’s success at Glasgow, and the NPCS will further benefit performance athletes and community participants when it opens in 2016.”

Heriot-Watt University Principal, Professor Steve Chapman, said: “This marks the start of big changes for Heriot-Watt and Scotland as the innovative buildings take shape within a parkland setting.

“The design for the Centre has been developed ‘around the athlete’, providing world class sporting facilities and services that will have a positive impact on the preparation and development of athletes, coaches and volunteers.”

Bowmer & Kirkland built the St George Park National Football Centre at Burton-on-Trent. Alan Johansen, Regional Director – North East and Scotland, said: “We are extremely proud to have been selected as preferred contractor on such a prestigious project for Scotland and we are looking forward to working with the entire project team.”

sportscotland chief executive, Stewart Harris, added: “It is great news that Bowmer and Kirkland have been appointed preferred contractors, confirming that this exciting project is making good progress.

“The spectacular success by Team Scotland athletes at the Glasgow Games was helped by the world-class sporting facilities we now have in Scotland, and the new National Performance Centre for Sport will further assist our performance athletes in honing their skills and delivering on the global stage.”

Councillor Richard Lewis, Edinburgh’s Culture and Sport Convener, said: “This is an exciting development for sport in Scotland and for Edinburgh, and will go a long way to ensure the legacy of the Commonwealth Games continues to inspire Scotland’s next generation of sporting heroes.

“The world-class facilities will prepare Scottish athletes for the world stage, while taking the needs of sports support staff including coaches, physiotherapists, and nutritionists into key consideration.”

Work on site at the new centre will start in early 2015 and it will open for business in summer 2016.

The existing facilities at the University, which include the current Sports Centre and Sports Academy, will also be bolstered by a new 120 station gym and restaurant area open to the general public.

It is expected that the National Performance Centre for Sport will be home to:

Heriot-Watt University’s strength as a leading technological and business university, renowned for innovation in science, engineering, business and design defines its presence on the international stage in areas of key world importance and value for society.

It has established a reputation for world class teaching and world renowned, practical, leading edge research. 50 per cent of Heriot-Watt’s research was rated as world leading or internationally excellent in the Research Assessment Exercise.

With leading links to industry and recognised for the quality of its degrees, 94 per cent of its graduates are in work or further study within six months of graduation.

Heriot-Watt has an established profile as an international university: a third of students studying at its Scottish campuses come from outside the UK and a further 17,800 students are studying for Heriot-Watt degrees in over 140 other countries worldwide, including at its Dubai and Malaysia campuses.

Heriot Watt University works in partnership with Heart of Midlothian FC, Scottish Squash and Racquetball, and is home to the East of Scotland Institute of Sport as well as holding current partnerships with Edinburgh-based performance clubs: Inverleith Hockey Club, Currie RFC and Edinburgh Jets Volleyball. The university is already recognised as sector-leading in areas of Sports Science and Coaching Development.