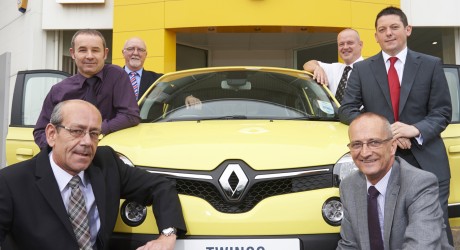 A GROUP of employees from a leading car dealership based in the North and North-east of Scotland have clocked up a combined total of 175 years’ service to the company.

Six members of staff from Ness Motors Ltd, which has car showrooms in Inverness, Elgin and Perth, have all helped to drive the business forward through hard work and dedication.

Chair of the Renault, Citroen and Dacia dealerships, Scott Lauder, tops the long-serving list with 42 years.

Alastair Kemp, sales executive in Elgin, has been with the firm for 32 years, having originally started when Ness Motors had a Thurso outlet.

Used Car sales manager for Inverness, John McDonell, started as an apprentice mechanic 27 years ago before diverting into car sales 11 years ago.

Steve Mitchell, who joined the firm as a technician 26 years ago, has been Citroen service manager for almost four years and recently in the last year combined with role as Inverness service manager.

Graeme Stewart has filled various roles in his 25 years and is now a director of the company.

Waldon Mackay joined as a sales executive 23 years ago, initially selling Renault new and used cars but now has add responsibility for Dacia and Motability.

Chair, Scott Lauder said: “For the six of us to hit this combined milestone shows the depth of expertise and experience Ness Motors can offer, providing assurance to customers and building up strong client relationships.

”We are grateful to each member of staff for such loyal and successful service.”