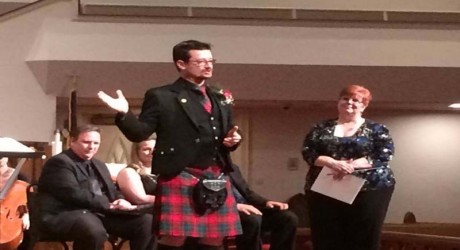 GLASGOW Clyde College’s Director of Music, Alan Craig, was recently welcomed by the Gwinnett Choral Guild in Georgia, USA, for the US premiere of his choral composition, ‘A Diminished Mass’, which they also performed.

Alan’s visit also caught the attention of First Minister, Alex Salmond, who wrote to Alan to extend his best wishes for the international performance as a great showcase for Scotland, strengthening cultural ties with the US.

‘A Diminished Mass’, which had premiered in Glasgow in 2011 to tremendous reviews, examines the cycle of error, renewal and reward as an integral part of the human journey and places the traditional liturgical texts in a modern setting. The 40-strong Guild wove a rich choral tapestry with strings and percussion.

Artistic director, Renee Wilson-Wicker, said of the performance: “We are so honored that Alan A. Craig chose the Gwinnett Choral Guild to deliver his amazing work to new audiences in the States.”

Alan comments: “The trip was magical and unforgettable. The premiere of my music was very well prepared and beautifully presented. It was a thrilling and slightly surreal experience to hear the piece in such a different cultural context. The performers overwhelmed me with their generosity, friendship and introduction to Southern US life.”