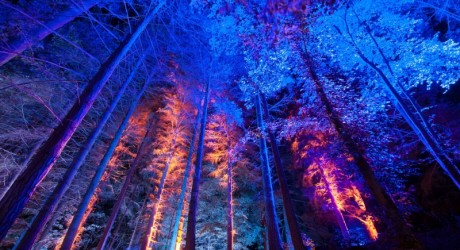 THE Enchanted Forest, Perthshire’s multi-award winning sound and light show, has released its visitor numbers for its 2014 show, which closed to the public on Sunday night, confirming it attracted just over 46,500 visitors to the Highland Perthshire area over a 24-night run.

The 2014 show, elemental, saw the return of the creative team that put together last year’s successful award winning show, with lighting design by Kate Bonney and Simon Hayes, sound design and composition by RJ McConnell and Jon Beales. Led by show producer, Derek Allan, their combined creative vision is being lauded as the critical success of an event that has been crowned Scotland’s Best Cultural Event no less than three times in the last four years.

This latest announcement confirms The Enchanted Forest has broken all previous box office records, and demonstrated a surge in visitor numbers of over 16 per cent on the previous year. It is predicted that the event’s impact on the local tourism economy is now in the region of £2million per annum with almost 50 per cent of all visitors to the event choosing to stay overnight in the area on their visit and a staggering 90 per cent citing the event as their main reason for visiting the area this Autumn.

“This is a tremendous success for Highland Perthshire tourism businesses and we are encouraged by the continued support of our visitors, many of them loyal visitors who return to the Forest year after year. It is a testimony to the hard work put in by the community that our visitors number continue to grow year on year, and that our show continues to go from strength to strength.”

Beneficiaries of The Enchanted Forest’s growth are not just exclusive to local businesses, but also include two national charities that will collect a windfall of £5,000 as a result of organisers’ decision to open up an additional show night specifically for their benefit. Children’s Hospice Association Scotland (CHAS) and Autism Scotland will now share the proceeds from that night between them.

“The Community Interest Company was this year, for the first time, in a strong position to give back to the local community and in addition we selected two charities that are very active in this area. We are delighted to have been able to assist Scottish Autism and CHAS and hope that they will benefit greatly from the funds raised by visitors to the show on 2nd October.”

Karen Wilson, fundraising manager for Scottish Autism and Alison Rennie, CHAS Fundraiser, issued their thanks to the Community Interest Company:

“We were delighted to be selected as the two charities to benefit from this event. This was a fantastic opportunity to raise the profile of our services which support people with autism and their families throughout Scotland and we’re thrilled to accept these funds which will be put to very good use in both charities.”

The Enchanted Forest will return in October 2015 and organisers have already opened up a subscription list for people who might have missed out on tickets this year to enable them to get advance notice of tickets going on sale in 2015. More information on how to sign up is available on www.enchantedforest.org.uk