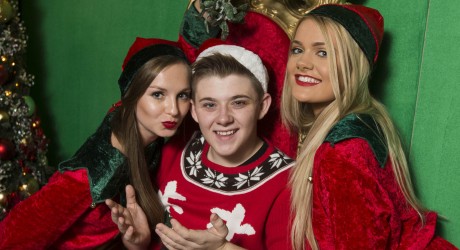 And he’s going to get his festive celebrations up and running in style by switching on the Christmas lights at the giant intu Braehead shopping centre on Thursday (November 6).

Nicholas, 17, from Wishaw, was runner up in last year’s X Factor show and he’ll be performing several songs at the intu Braehead event, as well as doing the honours with the Christmas lights.

Shoppers will also be entertained by The Singing Kettle, boy bands Rewind and 4th State, along with the RockUs Community Choir. And host for the night is Britain’s Got Talent star, Edward Reid. The free fun starts at 5.30pm and goes on until 7.30pm and of course, Santa Claus will be making a guest appearance.

Nicholas said: “Christmas is definitely my favourite time of the year and what better way for me to get my festive season started than switching on one of the of the biggest sets of Christmas lights I’ve ever seen.

“I just love everything about Christmas and I’m hoping we’ll have snow this year. When I was a wee boy I suffered from asthma and I didn’t get out in the snow much during the winter.

“But I’m fine now and I really enjoy getting out there in the snow and having fun making snowmen and having snowball fights – all the things I missed out on when I was a kid.”

Last Christmas was a hectic time for Nicholas as the X Factor show had finished shortly before then and he was busy with all the media attention and promotions after losing out to his friend, Sam Bailey in the final.

And Nicholas recalls how his mum embarrassed him in front of millions of TV viewers when she revealed on X Factor that Nicholas had cried one Christmas morning when he got a surprise present.

“I was 13 at the time and I was desperate for a Sony PSP,” explains Nicholas. “My mum, Eileen, and dad, Derrick, told me they couldn’t get me one as they were sold out in the shops.

“But when I woke up on Christmas morning and started opening my presents, the last parcel was a PSP and I was so happy I was in tears.

“And then last year on X Factor my mum told everyone I had started crying when I got that present. How embarrassing is that?”

Nicholas is presently on a nine-date tour throughout the UK and is recording a second album as a follow-up to the successful debut album In The Arms Of An Angel, which got to Number 6 in the UK album charts and Number 1 in the Scottish charts.

Assistant marketing manager for intu Braehead, Christine Macdonald, said: “We’ve a fantastic line-up of entertainment for shoppers when our new-look Christmas lights are switched on.

“This year, we’ve also got a traditional-style Santa’s Grotto for kids and when the big man in the red suit makes an appearance at our Christmas lights switch on, that’s the sign that the festive season has well and truly begun.”