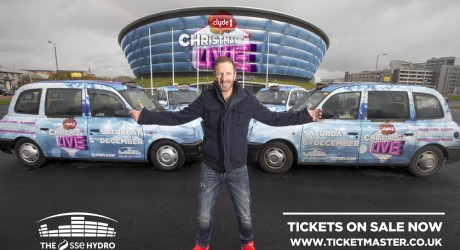 Clyde 1 returns to 12,000-capacity SSE Hydro on Saturday, 6 December with a festive twist and star-studded line-up … and more acts to be announced soon

In partnership with Little Big Shot, this year’s concert at the spectacular SSE Hydro will attract up to 12,000 fans for another sensational evening of non-stop, live entertainment from some of Britain’s most exciting music talent. Tickets for the gig are already on sale, with all information available at www.clyde1.com/LIVE

Today’s announcement by Clyde 1, the number one commercial station in Glasgow and the west, confirms four of the acts who will take to the stage on the first Saturday in December:

Clyde 1 breakfast show host, George Bowie, said: “The buzz for Clyde 1 Christmas LIVE 2014 has been great since we announced these four brilliant acts on air today

“I can’t wait to see our listeners pack out the awesome venue that is the SSE Hydro when Passenger, Tulisa, Ella Eyre and Neon Jungle take to the stage in December.   Having seen the atmosphere created by a full house last year I’m looking forward to another huge Clyde 1 crowd making even more noise next month.

“And the line-up doesn’t end there! We’ll be announcing even more acts on Bowie at Breakfast very soon – the countdown is well and truly on to Clyde 1 Christmas LIVE getting the festive party season off in style!”

Clyde 1 Christmas LIVE 2014 builds on the success of the same event held for the past four years.