Media Release: A festive feast of programmes on BBC ALBA 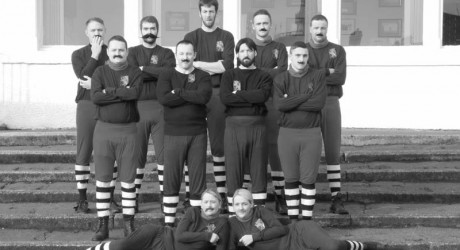 BBC ALBA has unveiled its festive television highlights for the Christmas and New Year period featuring exciting entertainment for all ages as well as compelling documentaries, live sport, traditional music and children’s programmes.

Among the Christmas highlights is a special Turas Tony / Tony’s Travels programme following well-known actor and director Tony Kearney as he takes on a poignant challenge to follow in his late father’s footsteps and attempt to take on the UK’s highest mountain as he enters the Ben Nevis Race.

BBC ALBA will also be delving into the fashion industry with a revealing documentary – Am Balach MacCuidhein – McQueen of Scots – paying homage to one of the UKs most avant-garde fashion designers, Lee Alexander McQueen. Told by renowned and stylish broadcaster Cathy MacDonald – herself a self-confessed devotee to McQueen – this programme will reveal the magnitude of influence his Scottish roots had on this creative genius’s work.

Cathy MacDonald will also feature in another hour-long documentary as she tracks the story of fictional Detective Fin MacLeod in Sàr-Sgèoil: Lewis Trilogy. Peter May’s Lewis Trilogy is one of the most popular crime series of recent years and Cathy follows the path taken by the central character of these best-selling novels. Her travels take her through the Hebrides, from her native Lewis to Eriskay in the south. En route, she visits the dramatic locations and meets the real life characters who inspired the author.

Further from home, a special three part series – Dilleachdain Gemma/Gemma’s Orphans – follows the remarkable story of 23 year old Glasgow student Gemma Steele who is responsible for the wellbeing of 25 children at the orphanage she built in Nakuru, Kenya. In her latest project, Gemma, who won the 2014 Young Scot Unsung Hero Award, is building a new orphanage in Kenya in conjunction with a Glasgow-based humanitarian design organisation which will provide beds for 40 children and with the space to expand. We follow Gemma as she strives to ensure the build is on track to completion within its tight eight-week deadline before she returns to her university studies in Scotland in September.

We will also follow Gaelic band, Mànran through their most important year yet starting with the release of their second album. As the six lads travel to America, Germany, the Western Isles and around Scotland performing their mix of Scottish pipes and Irish Uilleann pipes with a modern traditional feel, they reveal the ups and downs of life on the road.

Sports fans are also well-catered for with Tartan Pride, a programme charting the football rivalry between Scotland and England which began at the world’s first international football match in Glasgow in 1872 and still retains a cultural and historical significance that resonates in Scottish society more than 140 years later.

There is also no halting the action on the pitch during the Christmas and New Year period, with live games from the Scottish Championship with Dumbarton v Falkirk and Falkirk v Raith Rovers as well as top flight highlights from the Scottish Premiership. This will be complemented by oval ball action as PRO12 rugby with Edinburgh v Treviso and Munster v Leinster screened live on the channel.

For younger viewers, a Gaelic adaptation of The BFG – The Big Friendly Giant is scheduled on  Christmas Day. The classic Roald Dahl story of Sophie, an orphan who goes on a magical journey with a big friendly giant, creating wonderful dreams, offers great family viewing.

And as always, programmes marking the arrival of both Christmas Day and the New Year will be particular highlights.  An Oidhche ron Nollaig captures the excitement and anticipation of Christmas Eve through specially commissioned illustrations, music and verse. Four readers, ranging from a grandfather figure sitting by the fireside to a little girl climbing the stairs to bed will share their sense of delight and anticipation at this magical time of year.   Earlier on Christmas Eve, an Alleluia! Christmas Special will feature contributions from Darren MacLean, Glasgow Gaelic Musical Association, Mairi MacInnes and James Graham.

Viewers will also be able to see the New Year 2015 in style with BBC ALBA’s live Hogmanay Cèilidh from Kilmallie Hall, Lochaber. Presenters Cathy MacDonald and Kirsteen MacDonald will be joined by a host of musical talent including Leo Moran, co-founder of The Saw Doctors and Anthony Thistlethwaite, co-founder of The Waterboys, who together form The Leo and Anto Acoustic Project. They will be joined by Skippinish, Ellen MacDonald, Seudan, multi award winning female choir, Atomic Piseag, as well as the foot stomping Glenfinnan Ceilidh Band.

Margaret Mary Murray, Head of Service for BBC ALBA, said: “We are looking forward to bringing viewers another wonderful mix of festive programming for all the family. Our Christmas and New Year schedule has been exceptionally popular in recent years and we hope the eclectic line-up of entertainment, documentaries, music, sport and children’s programming will provide something for everyone to enjoy at this special time of year.”