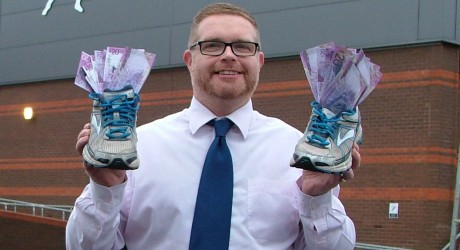 LEISURE centre boss, Derek Cuthbertson, is a real good sport when it comes to raising money for charity.

In the past nine months the 41 year-old has run an incredible FOURTEEN 10k races with £1,025 being collected in sponsorship for Cancer Research.

Derek, a dad of two from Linwood, in Renfrewshire ran races in all kinds of conditions that were being held the length and breadth of Scotland.

The senior facility duty manager at Paisley’s Lagoon Leisure Centre revealed that he was spurred on in his physical endeavours by the thought of members of his family who have fought cancer.

And Derek is delighted to have raised so much money as he had set himself a target of raising £250 at the start of his year of races.

Derek said: “I have family and friends who have all been victims of cancer and while some have survived, sadly others have not.

“I’ve been running for about two years and I decided to raise money for Cancer Research by taking part in as many 10k races as I could this year.

“I’m very grateful to my family, friends and work colleagues who have sponsored me and it’s brilliant that I raised so much more money than I first thought I would.”

“But it was worth all the effort to raise as much money as I did for a very good cause.”

Derek is certainly not planning to hang up his running shoes and has set himself another challenge for 2015. He is going to take part in the Cape Wrath Challenge, which is a week-long series of races covering various distances and terrains.

Derek Gillespie, interim chief executive of Renfrewshire Leisure, said: “Running all those 10k races and raising so much money for Cancer Research is an amazing achievement for Derek.

“We encourage all our staff to set personal fitness targets each year and Derek has certainly surpassed his by a long way.”

Anyone wishing to donate to Derek’s fundraising for Cancer Research can do so at www.justgiving.com/Derek-Cuthbertson/ .