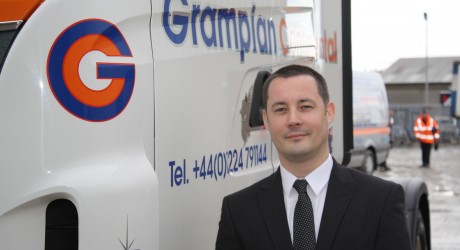 AN award-winning haulage firm has become one of the first companies in Scotland to receive an industry-accredited certification, ahead of the 2016 deadline.

Grampian Continental, which is based in Kinellar, Aberdeenshire, and employs 102 staff, has recently been awarded an Authorised Economic Operator (AEO) accreditation by the HM Revenue and Customs (HMRC) and the European Commission (EC).

The accreditation, which is granted to businesses that satisfy strict customs criteria and demonstrate a consistent quality and a trustworthy service, was awarded to the firm on 3 December 2014.

By May 2016, it will be compulsory (see here, for more) for all companies operating in the haulage industry to be AEO accredited.

Grampian Continental, which has more than 550 clients in the UK and 300 in Holland, are aiming to lead the field in compliance when moving goods across the UK and Europe.

Ben Gracie, business development manager of Grampian Continental, said: “Being one of the first recipients of the AEO accreditation, we will now face less challenges and be able to fast track international customs control transactions when operating throughout Europe. The accreditation also ensures that we have priority over other importers and exporters who don’t have the accreditation, which helps to improve our efficiencies and overall service for clients.

“We are delighted to have been awarded this accreditation a year and a half early and look forward to utilising the benefits it will bring to the company in helping us deliver the best service to our customers.”

Grampian Continental proactively worked with customs and AEO consultants, The Customs People, for six months prior to achieving the accreditation.

David Miller, of The Customs People, said: “AEO status is at the cornerstone of new customs legislation which will become effective on 1 May 2016. This will have a major impact on any business involved in the supply chain be that exporters, importers or logistics providers. AEO status is an international kitemark and provides both logistics providers and exporters with the opportunity to have a commercial edge over their competitors as it shows that they operate to the highest standard.”

The firm, which was launched in 2009 by Gavin Murray, Neil Bremner and Michael Lacey, has continued to grow and invest in its fleet and service over the past five years, and now has five offices world wide including; Aberdeen, Great Yarmouth, Newcastle, Holland and Italy.

Grampian Continental now reaches a £15 million turnover in the UK alone and operates a varied modern fleet with the capability of transporting a diverse range of loads, from 1kg up to more complex loads, such as 80 tonne offshore structures.

Issued by Frasermedia Ltd on behalf of Grampian Continental.