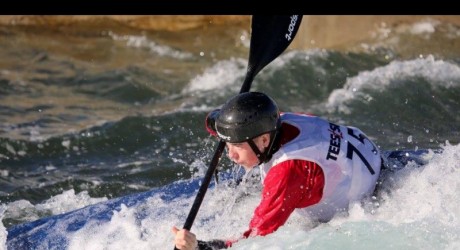 A 14 year-old canoeist from Highland Perthshire is paddling towards a place at the next Olympics after receiving sponsorship from The Enchanted Forest Community Trust.

Duncan Edwards received funding from the organisers of the award-winning event to allow him to acquire the best kit to enable him to compete at the highest level.

Since receiving his funding at the beginning of 2014, Duncan has worn his new Scottish slalom kit with pride. He started the year very well by being promoted to the Canoeing Premier Division in May, making him the youngest male Breadalbane paddler ever to achieve this accolade.

After an intensive year of training in both the K1 and C1 classes across the UK and Europe, Duncan has finished his season on a high as the K1 Men’s Scottish Junior 18 Champion. He also participated at Lee Valley – the white water centre used for London 2012 – where he competed against the cream of canoeing, including Olympic champions.

Duncan is now preparing for next year’s season which begins at Grandtully, Perthshire, in early March.

The Enchanted Forest Community Trust has enjoyed seeing success stories emerge from the fourteen organisations and individuals that received funding at the beginning of the year. Graham Brown, chair of the Trust, commented: “Seeing Duncan’s progress and knowing that the Community Fund has helped nurture his sporting talent is fantastic. It is a privilege to be able to support and assist groups or individuals, clubs and events in the local community here in Highland Perthshire.

“2014 was the first year we were able to offer a Community Fund and we are delighted to be in a position to invite organisations and individuals to apply for funding again for 2015.”

This year, the Enchanted Forest Community Trust is making £10,000 available and applications are welcome from organisations with projects that will offer a tangible benefit to the local Highland Perthshire community.

The deadline for all applications is Friday 13 February and the form can be found on  www.enchantedforest.org.uk.

Initial expressions of interest should be sent to Antonia Malcolm and, if you would like more information about whether your project is eligible for funding, please email Antonia on  Antonia.malcolm@bluebottle.com