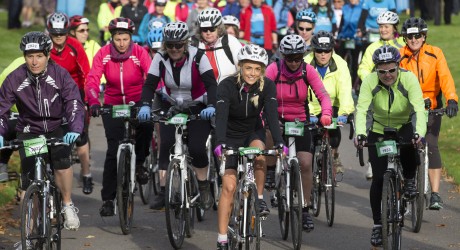 SCOTLAND’S woman-only sportive is set to move up to a different league next year as Macmillan Cycletta Scotland unveils its 2015 line-up. The UK’s leading women-only sportive series will comprise 100km and 150km rides for the first time, as the Cycletta series looks to engage more committed female cyclists.

Four of the five-event series, which includes Scotland, will now comprise of 50km, 100km and 150km rides. The longer rides will for the first time be positioned at more experienced riders looking to take on challenging sportive distances. But those four events will retain their appeal for first-time sportive riders with a 50km ride. In recent years, the demand for longer distances in Scotland has been noted by organisers with last year’s new 100km distance attracting the most participants.

The Macmillan Cycletta series will launch on Saturday 20th June with a family-friendly day at Woburn Abbey in Bedfordshire with the Scottish event following in hot pursuit on Sunday 19th July at the historic Scone Palace near Perth with a new range of distances (50km; 100km and 150km).

Macmillan Cycletta organiser, Human Race, has also announced Early Bird and group discounts for the events series. Anyone booking before Jan 31st will receive an Early Bird discount of £5 off the full price. And those who sign up as groups will be able to get five entries for the price of four.

Human Race’s Gillian Daly commented: “The Macmillan Cycletta has already firmly established itself as the UK’s leading series of women-only cycling events. What we’re now doing is reflecting a growing demand from women for a greater range of distances to ensure there’s one that’s right for them.

“We’re expecting very strong demand for the 50km and 100km rides, which have shown themselves in recent years to really engage those new to riding in sportives as well as those more experienced cyclists looking to set themselves a challenge.

“But it’s the 150km route that we’re expecting to attract significant attention. When we spoke to female cyclists about our plans, we found that a lot of women were holding themselves back, thinking that sort of distance was too far for them, when in fact they just needed the encouragement of an event to go for.”

Gillian added: “If we sell out the longest distance at each of this year’s events, then we will look at increasing our capacity for next year. We’re already seeing real excitement about the new distances, which suggests there’s real demand from women with a wide range of abilities for an event that’s tailored to them.”

Entries are now open for the Macmillan Cycletta Scotland and all events in the series at http://humanrace.co.uk/cycletta/