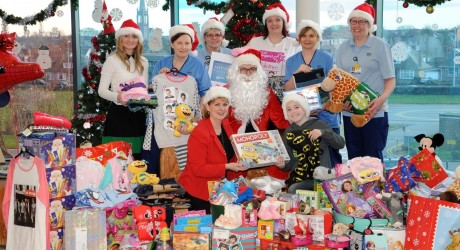 A SPECIALIST North-east recruitment firm has donated hundreds of toys and pyjamas towards a Christmas campaign to support a local children’s charity.

Genesis Personnel, which has offices in Aberdeen and Peterhead, delivered Christmas early this year by donating more than 600 toys, gifts and pyjamas to The Play Service at Royal Aberdeen Children’s Hospital (RACH), as part of its Christmas Gift Appeal.

The firm, which specialises in delivering expert recruitment solutions to the North-east, received boxes of new and unwrapped gifts, including teddy bears, toys and pyjamas from employees, clients, suppliers and candidates to help the charity supply gifts to children and young people who stay at the hospital over the festive period.

The Play Service works throughout RACH, supporting patients, their siblings and wider family. Using play as a medium, the specialist team relieve boredom and anxiety, using familiar games and toys to explain procedures and introduce a touch of normality at a time when children and young people need it the most.

Sales and recruitment manager at Genesis Personnel, Moira Murawiecka, said: “Instead of sending Christmas cards this year, we decided to organise the gift appeal and donate some goodies to the children and young people staying at RACH over the festive period. We were truly overwhelmed by the generosity from our employees, clients, candidates and the general public and very thankful for each and every gift. We know that Christmas is a special time, but it will be undoubtedly hard for those in hospital, so we can hopefully make a difference with some extra gifts that will put a smile on their faces on Christmas day.”

Play Specialist, Maureen Mcdonald, said: “We are incredibly grateful to all the staff at Genesis Personnel for this thoughtful gesture. The importance of play during a child’s stay in hospital cannot be underestimated and I know these latest additions to the play area will be put to good use.”

Genesis Personnel, which was first launched in 1975, currently has 20 employees across its two offices in Aberdeen and Peterhead, and has participated in various fundraising initiatives over the past year for a number of local charities and organisations including, CLIC Sargent, Cystic Fibrosis Trust and CLAN.

Issued by Frasermedia Ltd on behalf of Genesis Personnel