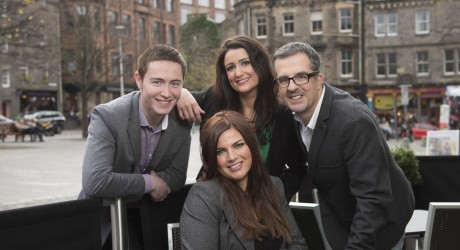 STV Edinburgh’s ‘The Fountainbridge Show’ launching on January 12 will air every evening between 7-8.30pm with a line-up of local presenters showcasing local music, culture and affairs.

Warners Solicitors & Estate Agents will feature in a brief ‘hottest property’ themed sponsorship bumper, sandwiching each segment before, after and during the show.

Jason Scott, a partner at Warners, is thrilled with the deal that will see the firm cement its high profile in the Edinburgh, Lothians and Fife.

Jason said: “The Fountainbridge Show is the flagship show on STV Edinburgh so for us it was a real opportunity to get on board from day one.

“The programme is designed to showcase everything that is good in Edinburgh and the surrounding area in terms of news, sports, entertainment and culture.  Warner’s see it as an opportunity that we can connect to and support.

“We also hope we can benefit from the association of STV with our brand, associating Warners even closer with the people of Edinburgh, Lothians and Fife.

“We want people to recognise Warners as the leading property solicitors brand in the area.”

As part of the sponsorship package, the Warner’s sponsorship bumpers will feature 18 times in each show, which is repeated later in the evening and the following afternoon.

STV’s head of sponsorship Debbie Robinson, said: “The launch of STV’s second city TV channel is a fantastic opportunity for advertisers to reach their targeted audience right in the city of Edinburgh. We are thrilled that Warners has come on board for the launch of The Fountainbridge Show and we look forward to working with them as the channel develops.”

Warners, which has three property shops, has held the unofficial title as Edinburgh’s leading property solicitor estate agent for 14 consecutive years since 1999, measured in terms of property sales as recorded by ESPC.

More information about Warners can be found on the website www.warnersllp.com

Ofcom announced the award of licences to STV for Glasgow and Edinburgh in January 2013.

STV Edinburgh will be delivered in partnership with Edinburgh Napier University, offering students the opportunity to work in a live television environment.  STV has also submitted applications to Ofcom to deliver local TV in Aberdeen, Ayr and Dundee. STV Glasgow launched in June 2014.

STV Edinburgh will broadcast on Freeview channel 23, Sky channel 117 and Virgin channel 159 and will be available to watch live on the STV Player. Ahead of the channel’s launch, viewers will be asked to retune their televisions to pick up the Freeview signal for channel 23.