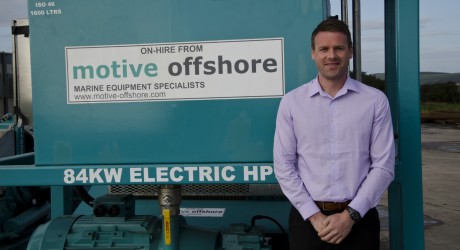 A LEADING North-east marine equipment specialist has strengthened its team with a key management appointment to accelerate further growth of the business.

Motive Offshore, which is headquartered in Boyndie, near Banff, in Aberdeenshire, has promoted Eddie Moore to head of sales at its Norway office, just over a year after launching in the region.

Operating as Motive Offshore Services AS in Norway, the international division has experienced exceptional growth, establishing a reputable name in the area and completing its first year of business with strong turnover figures exceeding NOK 5m.

The firm, which specialises in the manufacturing and rental of high capacity winches, umbilical deployment equipment and specialised subsea equipment including subsea winches and baskets, has a fully operational base in Stavanger and has invested in excess of £2m in its marine equipment in the last year.

Mr Moore brings more than seven years of experience in the oil and gas lifting sector and will be responsible for driving sales activity and developing Motive’s client base and the brand identity in Norway. Mr Moore started work with Motive Offshore in May last year as a sales engineer, and will join Finn Wold and Ryan Thomson in Norway.

Mr Moore, said: “Since launching last year, Motive Offshore Services AS has continued to experience consistent growth in the market, which makes the move very exciting for me. I used to live in Norway when I was younger, so I can speak the language and have a good understanding of the country, which will be very useful for customer relationships.

“Motive Offshore’s equipment is also ideally suited to the Norwegian sector as it has been fully certified to industry standards which is vital with an increased focus on reliability, standardisation and efficiency. In the last year, Motive has invested considerably in this area to ensure our equipment is safe and up-to-date, offering increased productivity and less downtime for our clients.”

Chief executive officer, James Gregg, said: “Motive Offshore Services AS has developed sustainable growth and success in Norway over the last year, with increased demand for our equipment and high level of service, which is a great achievement. Eddie has a wealth of knowledge of the industry and will bring strong expertise to the Norwegian market, which will be invaluable for the business and our clients. His appointment will help to expand and enhance our team’s capabilities and our resources to ensure we offer our clients a first class service at all times.”

Motive Offshore, which was first established in 2010 by James Gregg, Dave Acton and Bob Smit, has grown rapidly since launching less than four years ago and now has over 100 employees across its three bases in Boyndie, Aberdeen and Norway. The firm has future plans for additional staff and further investment in rental equipment, which will be showcased at the upcoming Subsea Expo in February 2015.

Check out too twitter.com/allEnergylPR for energy-related media releases on allmediascotland.com.