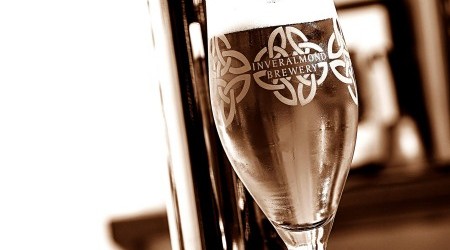 INVERALMOND Brewery, one of Scotland’s leading independent craft beer breweries, has spread its tasty cheer across the world by making and selling an average of almost four pints every minute in 2014.

This year, the team at the Perth-based business are keen to capitalise on their international appeal by reaching all four frothy corners of the globe through introducing more beers to their growing range and increasing their distribution both internationally and in the UK.

More than 1.9 million pints of beer from the craft brewers were sold last year, showing their popularity with beer lovers and their broadening appeal in a competitive and crowded market. As a result, the brewers have been able to freeze their prices for this year to further support their customers at home and abroad in an exceptionally tough trading environment.

Established in 1997 in the heart of Scotland, Inveralmond have created a diverse and exciting range of beers, offering unique and memorable taste experiences to beer lovers. Recently launching the Belgian influenced De Mons, the third beer in their internationally flavoured “Inspiration Series”, the innovative brew team are looking forward to more launches in 2015.

Bob Hogg, commercial director at The Inveralmond Brewery, commented: “2014 was an excellent year for us launching additions to our Inspiration Series as well as continuing to grow our presence internationally, reaching beer drinkers in places as far away as Russia, China and Canada. We had a lot of fun launching our latest beers online – beer fans around the world could join in and enjoy the launch with us, no matter where they were in the world.”

Bob continued: “We are also pleased that we have not had to increase the prices of our draught and packaged beers for 2015, barring any variation in HMRC excise rates. The team here have worked exceptionally hard over the last few months to put us in a position where we are able to freeze prices for this year.”

To find out more about The Inveralmond Brewery and where to sample their beers, visit www.inveralmond-brewery.co.uk

Opened on 14th May 1997, The Inveralmond Brewery is an expert craft brewer of a range of beers including Lia Fail, Ossian and Thrappledouser. Situated at the very heart of Scotland, in Perth, the Brewery nestles between the fabulous rolling hills of Perthshire, the mighty Grampian mountain range and is surrounded by crystal clear rivers, providing inspiration and nourishment for the beers it produces and exports around the globe.

Check out too twitter.com/allDrinkPR for drink-related media releases on the site…