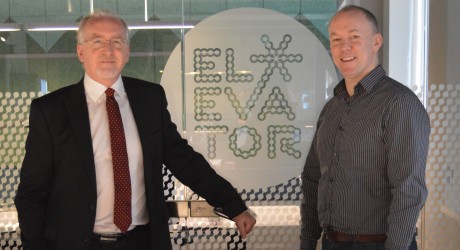 A LEADING Scottish business support and development organisation has made two key management appointments to strengthen its services.

The company recently launched the new £1million centre of entrepreneurship, situated in The Hub in the city’s Energy Park at the Bridge of Don, along with its Elevator Programme, which will be launched in early-March. The 20-week business accelerator programme, which is the first of its kind in the UK, has been created for high growth potential start-ups from a range of sectors, including energy, technology and engineering, to fast their business making them investor ready in a global market place.

Graham, who has worked with the company for five years will oversee the vast range of projects carried out at Elevator, and increase the company’s corporate engagement across both public and private sectors.

Andy was contracted as project manager to oversee the redevelopment of the centre and assisted with rebranding the company in 2014. He will now work with the company on a permanent basis to focus primarily on the Elevator Programme.

Elevator chief executive, Gary McEwan, said: “It has been a busy six months for Team Elevator as a whole, as we embrace new head quarters and a new way of operating additional business streams that complement the work already carried out by the company.

“Graham and Andy’s appointments are essential to ensure that the company continues to deliver a first-class service at such a crucial time, and they will both use their wealth of skills and expertise in their different fields to complement the work carried out by Elevator, the company’s ethos and ambitions for the future.”

Issued by Frasermedia Ltd on behalf of Elevator