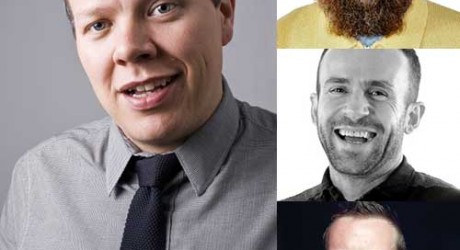 With his easy charm, cheesy singing voice, razor-sharp wit and clownish physicality, Rob Deering has established himself as a firm favourite on the nationwide comedy scene. Some even say that Rob Deering and his guitar are ‘the finest double act working in Britain today’.

“Ingenious and hilarious” – The Guardian

Deering was the host and writer of three series of Out to Lunch on BBC Radio 2.

He also hosted 99 Things to Do Before You Die on Channel 5. He has always been an ardent quiz fan. It all started aged 12 when his extrovert nature and love of a good quiz led to his first TV appearance, on the successful and well-known TVam game Crack It. His rubbish answers meant he failed to win the Sinclair ZX Spectrum for his school!. Since then he has appeared on Channel 4’s Fifteen-to-One and won both a special edition of the Weakest Link and an edition of Celebrity Mastermind.

Phil Jerrod will join Deering on the Drygate stage. His innovative stream-of-consciousness style, inspired by a harsh upbringing in the cruel and unforgiving conditions of middle-class rural Warwickshire, has seen Jerrod perform in clubs, arts centres and theatres throughout the UK and helped build his reputation as having grown one of the largest beards in stand-up comedy.

Also on the bill at Drygate will be up and coming Glaswegian comic Gary Meikle, who took to the comedy stage for the first time in 2013. With his strong sense of what makes a great story, often venturing towards the dark side and covering growing up in Glasgow, failed relationships and his disdain for children, he is fast making his mark on the UK comedy scene. He reached the semi finals of the Scottish Comedian of the Year competition in 2013 and continues to grow in stature in clubs across the country.

“Meikle has a strong stage presence and passionate energy” – Chortle

As compere for the evening, 6’5” powerhouse, Scott Agnew’s easy-going, laid back delivery and friendly approach to stand-up will lull the Glasgow audience into a false sense of security before he spins yarns of general misadventure that will both shock and have them laughing uncontrollably.

“Relaxed and adaptable, Scott Agnew is a consummately entertaining storyteller with a devilish eye for the absurd detail. Kind of a genius” – The List