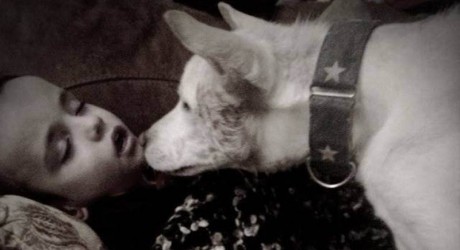 A SCOTS mum has told how a mongrel dog she rescued from the illegal meat trade in Thailand has developed an amazing relationship with her son who suffers from cerebral palsy and autism.

Amanda Leask, 44, was horrified when she saw a photograph of the dog, she now calls Miracle, hanging out of a cage with more than 1,000 other dogs that had been rescued as they were on their way to be slaughtered and sold as food.

Amanda, from Strathglass, in Inverness-shire contacted the rescuers and paid for Miracle to be given medical treatment and brought to Scotland where she now cares for him.

And the bond between Miracle and Amanda’s six year-old son, Kyle, has led to the dog being shortlisted in the Crufts Friends for Life competition.

Online voting is now taking place and Amanda hopes Scots will vote for Miracle before the competition closes on March 7.

The contest winner will be presented with a trophy at Crufts two days later.

Amanda explains the relationship between her son and the dog:

“It’s very evident that watching the dog moving around and his tail wag make Kyle smile and giggle.

“I’m a great believer that dogs and kids understand each other especially when both have come from a tough place and rough beginnings.

“Kyle just loves to touch Miracle and the dog will see him with his hands reaching out and he’ll walk over to let Kyle touch him.

“It’s like an unspoken language – as if the dog understands that Kyle needs attention.

“Kyle can’t speak out, can’t say Miracle’s name, can’t call out to him. There’s just this telepathy between the two that’s lovely to see.”

Amanda added: “Really the best way I can describe the connection between Kyle and Miracle is that they’re two kindred spirits recognising one another are a little broken.

“They give each other confidence and Kyle has helped Miracle trust again and show that, because his hands are gentle, not every set of hands hurt him.

“They are my little Bravehearts and I hope people recognise their special bond and vote for Miracle, especially as he is representing Scotland in the competition.”

You can log on to http://channel4.com/cruftsvote to see a video of Kyle and Miracle and vote for them.